Just out of Gundagai is the Dog on the Tucker Box at Snake Gully in NSW.
The Statue of the Dog was unveiled by the then Prime Minister of Australia Joseph Lyons in 1932 as a tribute to pioneers.
Joseph Lyons was born in Stanley Tasmania :)

The Statue was inspired by a bullock drover's poem, 'Bullocky Bill', which humorously describes a series of misfortunes faced by the drover, culiminating in his food being spoiled by his dog who sits either in or on his tuckerbox. (Similar to a lunchbox)

As I came down Talbingo Hill
I heard a maiden cry,
'There goes old Bill the Bullocky-
He's bound for Gundagai.'
A better poor old begger
Never cracked an honest crust,
A tougher poor old beggar
Never drug a whip through dust.
His team got bogged on the five-mile creek,
Bill lashed and swore and cried,
'If Nobbie don't get me out of this
I'll tattoo his bloody hide.'
But Nobbie strained and broke the yoke
And poled out the leader's eye,
And the dog sat on the tucker-box
Five miles from Gundagai. 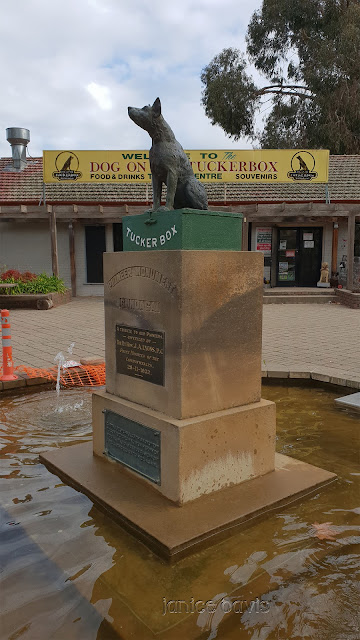 A wishing well at the foot of the Dog on the Tuckerbox, and a souvenir shop/food behind. 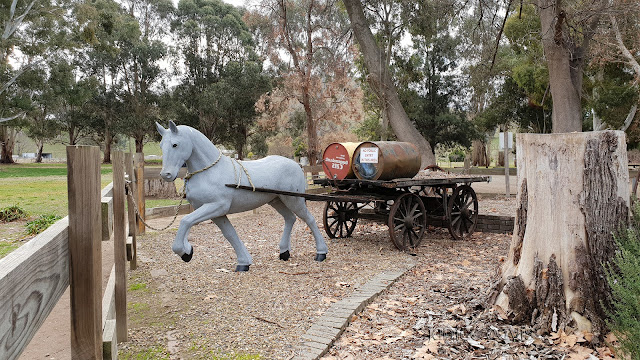 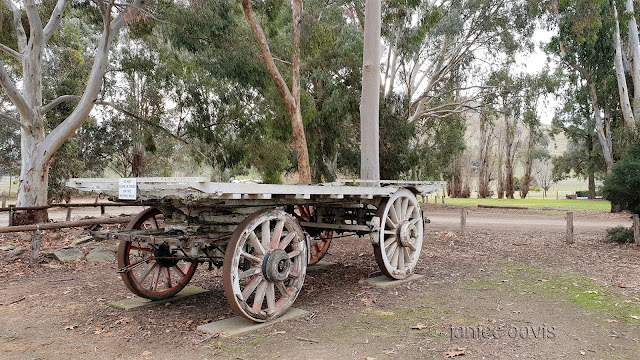 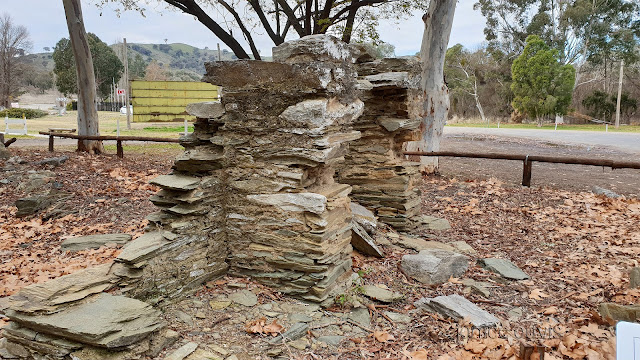 These are the ruins of an inn that was built by Joseph and Rosannah Carberry in 1857-8 and opened by them as 'The Limestone Inn' in April 1858. It consisted of twelve rooms with a cellar at the southern end, a detached kitchen, storeroom, stables and other outbuildings, all of them built of stone.  The Carberrys erected the inn to cater to the passing trade on the main road between Sydney and Melbourne, but it also attracted much local custom largely because of Rosannah Carberry's fine piono-playing.  In April 1861, a bushranger named 'Jack-in-the boots' and an accomplice held up the inn and robbed patrons and staff of their money.  After the Carberry changed the inn's name to '
The Australian Arms' for a short period, it was run by a succession of other licencees as 'The Squatter's Arms' from 1865 until it finally closed in 1876. 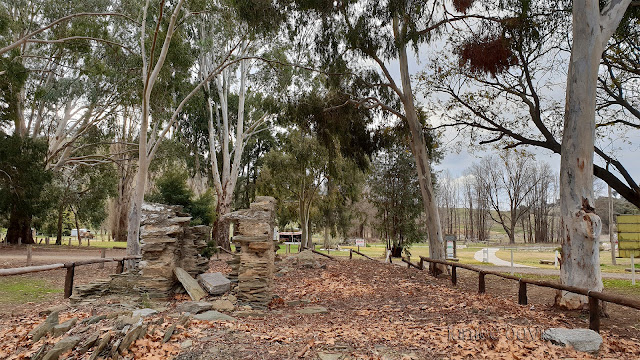