I have returned.
To continue our holiday in Winter 2016..

:The rainforest is named after Richard Daintree, an Australian geologist and photographer (1832-1878):
Wikipedia 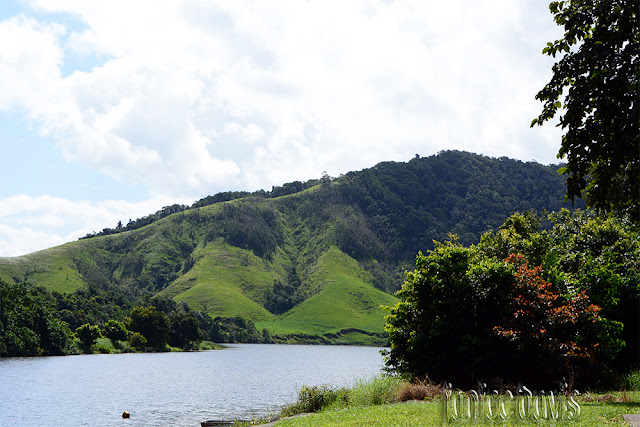 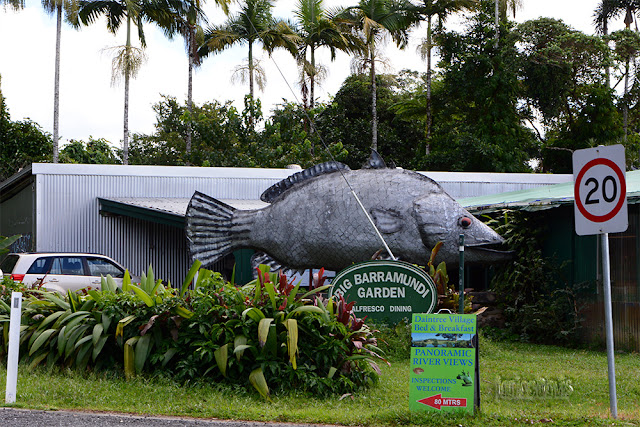 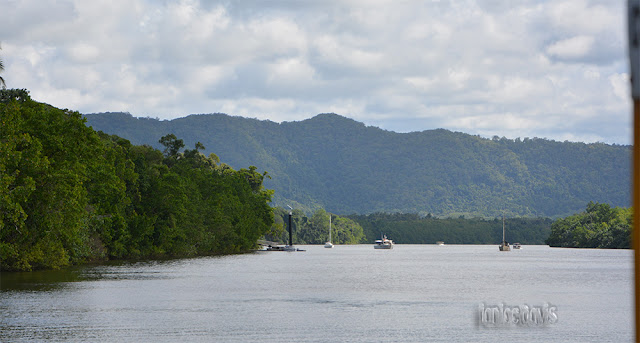 The Daintree River which you go across on a barge.

Markings on the sand.

Time to have a break from blogging.  Will be back in a couple of weeks.

Have included a little reading for those that have time about Tasmania. 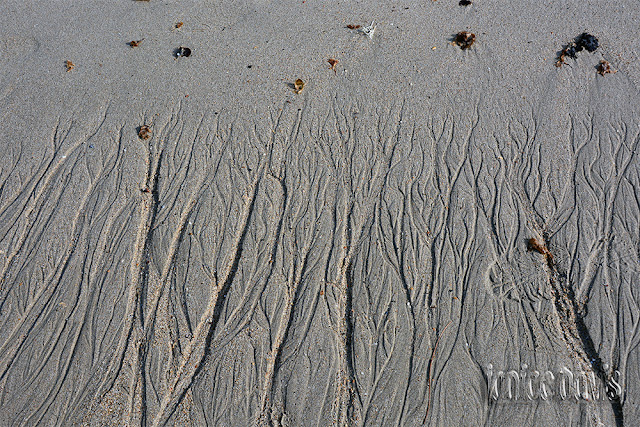 The markings on the sand reminds me of trees or a pathway.

Tasmania abbreviated as Tas and known colloquially as ("Tassie") is an island
of the Commonwealth of Australia. It is located 240 km (150 mi) to the south of the Australian mainland, separated by Bass Strait. The state encompasses the main island of Tasmania, the 26th-largest island in the world, and the surrounding 334 islands. The state has a population of around 518,500 (as of March 2016), just over forty percent of which resides in the Greater Hobart precinct, which forms the metropolitan area of the state capital and largest city of the state capital and largest city, Hobart.
Tasmania's area is 68,401 km (26,410 sq mi), of which the main island covers 64,519 km (24,911 sq mi)

Tasmania is promoted as a natural state; almost 45% of Tasmania lies in reserves, national parks, and World Heritage Sites and the state was the founding place of the first environmental party in the world. Though an island state, due to a mapping error the state shares a land border with Victoria at its northernmost terrestrial point, Boundary Islet, a nature reserve in Bass Strait. The Bishop and Clerk Islets, about 37 km south of Macquarie Island, are the southernmost terrestrial point of the state of Tasmania, and the southernmost internationally recognised land in Australia.


The island is believed to have been occupied by Aboriginals for 40,000 years before British colonisation. It is thought Tasmanian Aboriginals were separated from the mainland Aboriginal groups about 10,000 years ago when the sea rose to form Bass Strait. The Aboriginal population was estimated to have been between 3,000 and 7,000 at the time of colonisation, but was almost wiped out within 30 years by a combination of violent guerrilla conflict with settlers known as the "Black War", intertribal conflict, and from the late 1820s, the spread of infectious diseases to which they had no immunity. The conflict, which peaked between 1825 and 1831 and led to more than three years of martial law, cost the lives of almost 1100 Aboriginals and settlers. The near-destruction of Tasmania's Aboriginal population has been described by some historians as an act of genocide by the British. 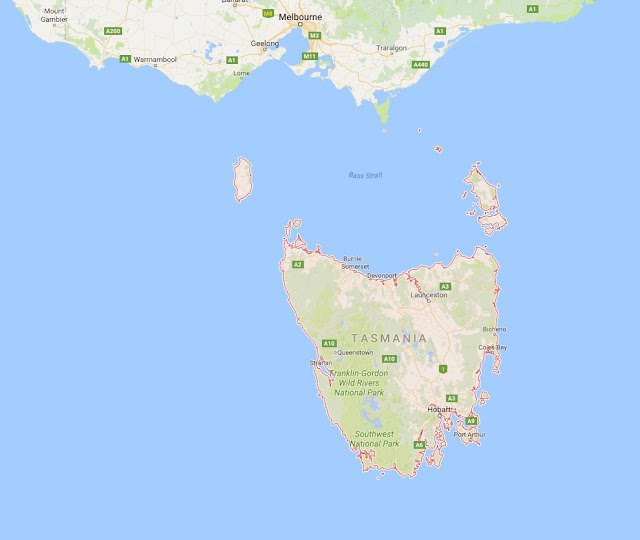 Email ThisBlogThis!Share to TwitterShare to FacebookShare to Pinterest
Labels: Holiday 2017

Many people stop at the village in the Daintree in Far North Queensland for a rest or stay in the caravan park.  The road is gravel and of course very dusty as we can see by this off road caravan and 4 wheel drive.

We headed to the Daintree rain forest whilst in Cairns in the winter of 2016 for day drive to Cape Tribulation passing through the Daintree.

There are plenty of tours to be hard along the river and through the rain forest. 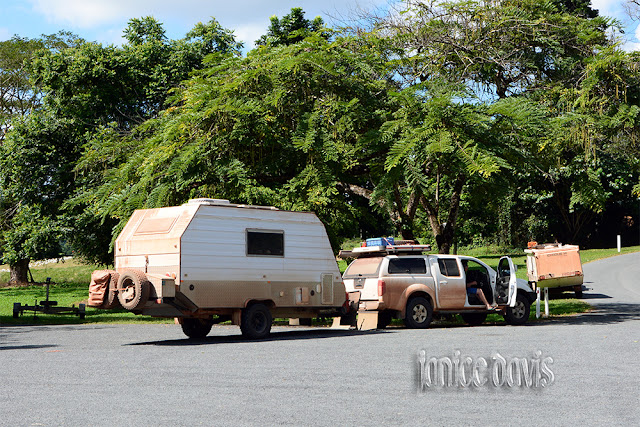 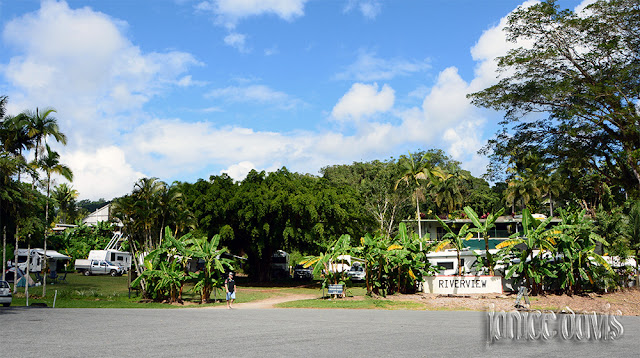 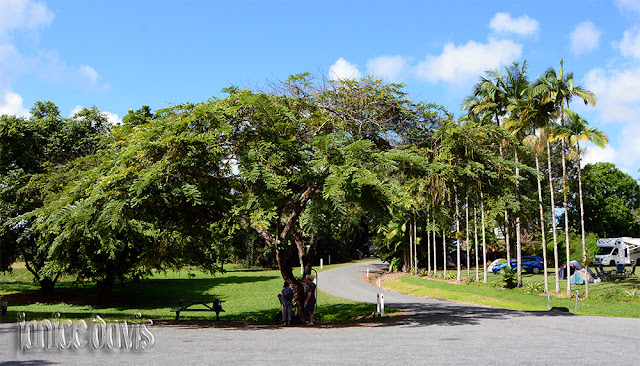 Below the Daintree River where the crocodiles are abundant and mostly large. 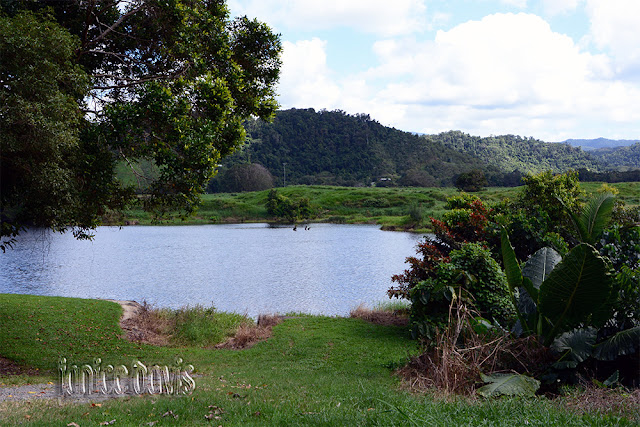 On the way further up north.

Found Cairns Botanical Gardens photo on my iPad!  Remember I thought they had been deleted, well they were but not on the iPad.

Headed further up Far North Queensland in Winter 2016 in the Tropics to a place called Mossman.
On the way there were a few canefields.
Sugarcane was brought to Australia in 1788 on the ships of the First Fleet.  However, growing wasn't successful further south in the beginning.
These photos were taken in the moving vehicle as there was no where to stop on the highway.
The house with a big veranda, the trampoline with net around for the children. 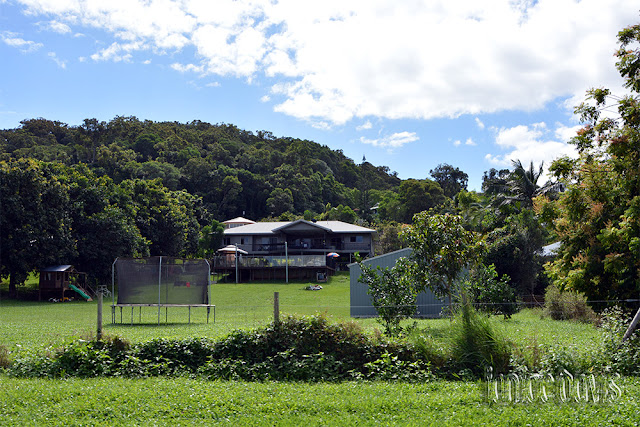 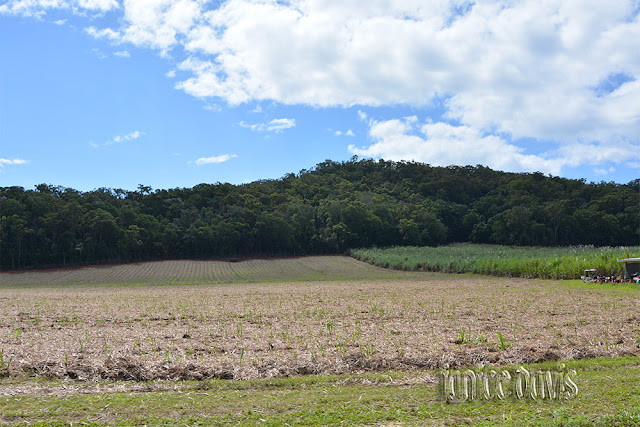 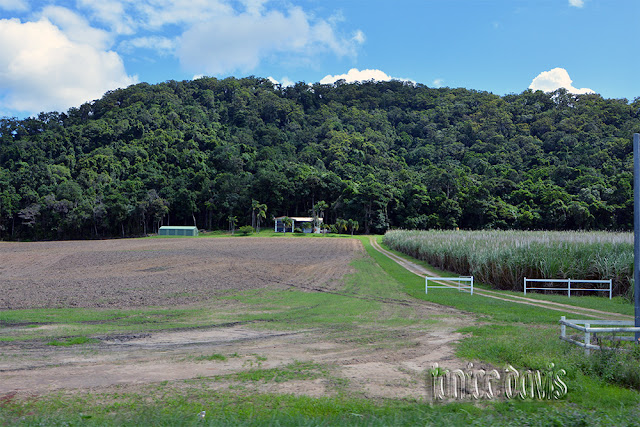 Beach signs which are on every public beach in the Tropics.  These signs are on the beaches in the Cairns area.  The photos can be made larger if you can't see them correctly - just click! 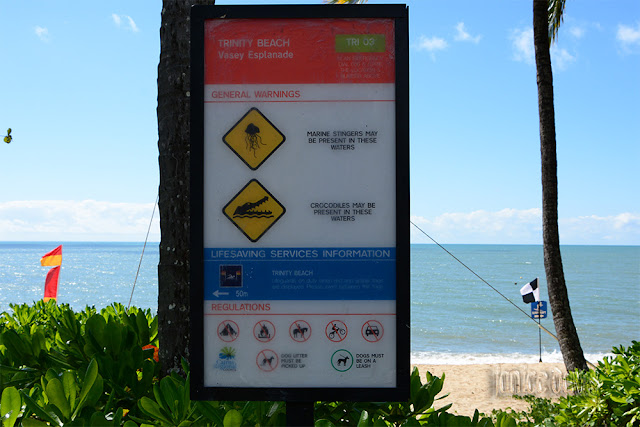 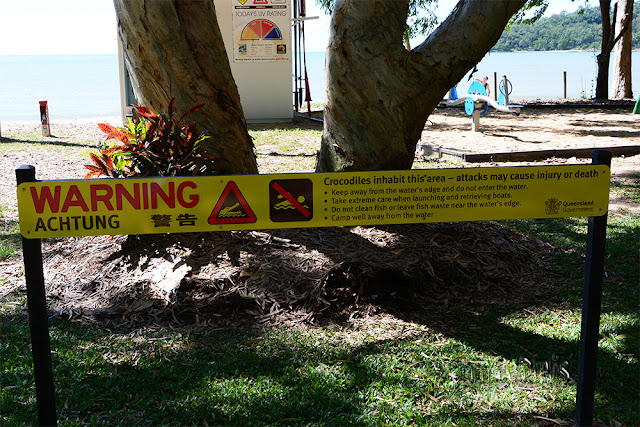 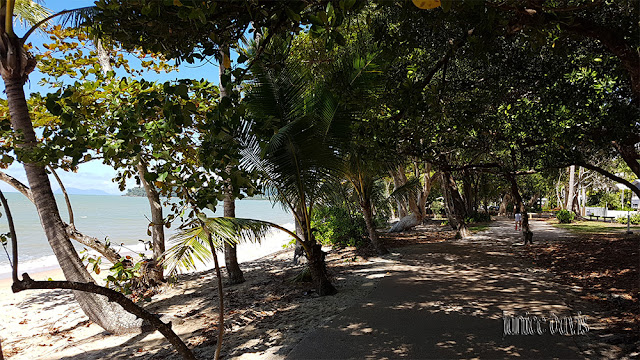 The above walking path along a beach. 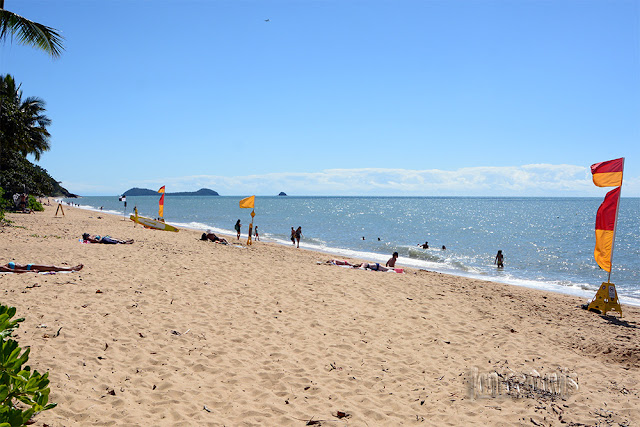 The usual, swim between the flags. 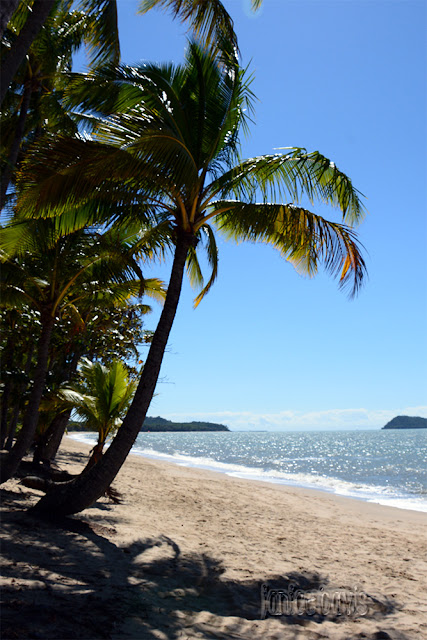 Always good to see palm trees growing in the sand.
Posted by Margaret D at 00:00 42 comments:

A trip to the Botanical Gardens in Cairns, Queensland.

Flecker Botanical Gardens is a heritage-listed botanic garden in Cairns, Queensland, Australia. It was built from 1886 to 1960s.

Headed there after a rainy humid day in Winter 2016.  Had more photos but can't find them - perhaps deleted (: 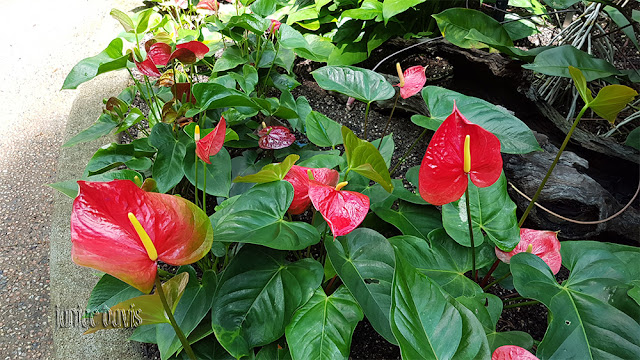 Spathiphyllum (Peace Lily) and never have we seen a purple one - these were taken with my Sumsung Galaxy Edge 7.  Both these photos were taken in the covered in area. 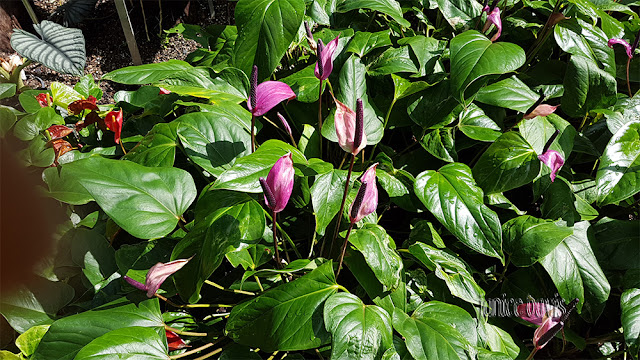 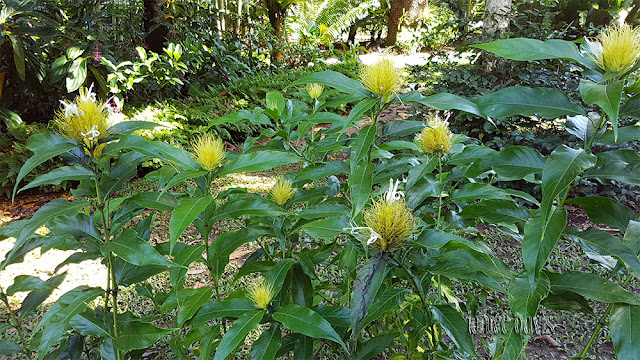 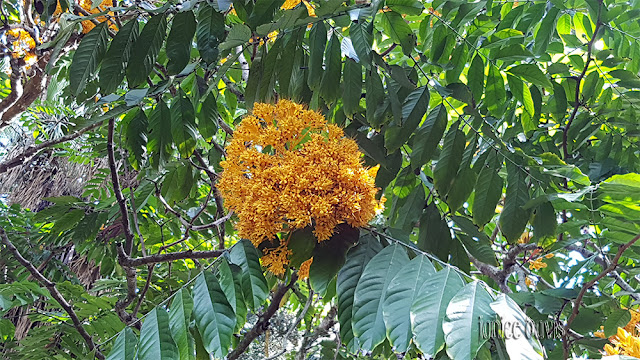 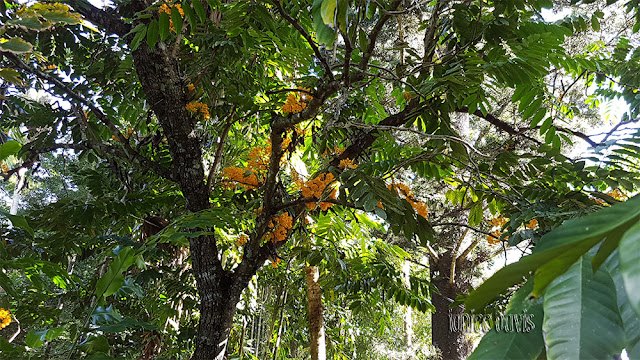 The last one is gone!
Yes, my late dad's only living sister and the last in his family of 12 brothers and sister - she died the other day so yesterday was her funeral down in the country far from home here.  Was so good to catch up with some of my 1st and 2nd cousins.

Then the week before that my husbands Auntie from Brisbane in Queensland came to stay for a week, as she does each year, she is 80.

Baby sitting over the weekend and this coming weekend, all this has kept the two of us busy.

The Spirit of Tasmania sailing across Bass Strait from Tasmania to the State of Victoria has been booked - Yes, off we are going again in the Caravan for just over 3 months in our winter.
Haven't a clue as to where we will be going, expect we will get off the ship in Melbourne, point the vehicle in a direction and head north to somewhere.
This will be about 16 times across, but not always with the caravan.

Back to 2016 Winter Holiday in Queensland.

The beachs below very near those rock formations. 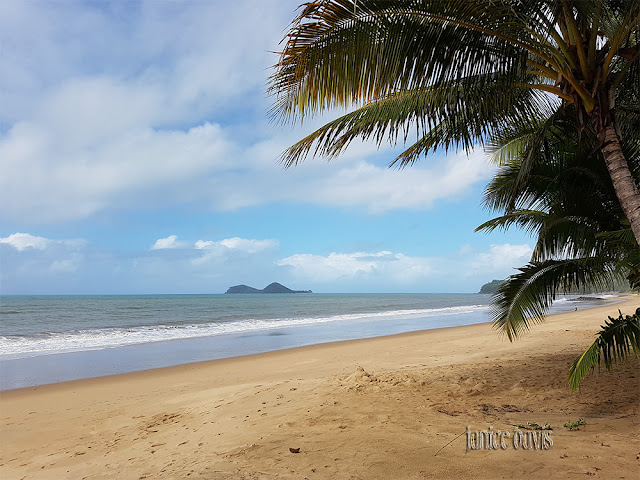 The beach at Wangetti, Queensland. 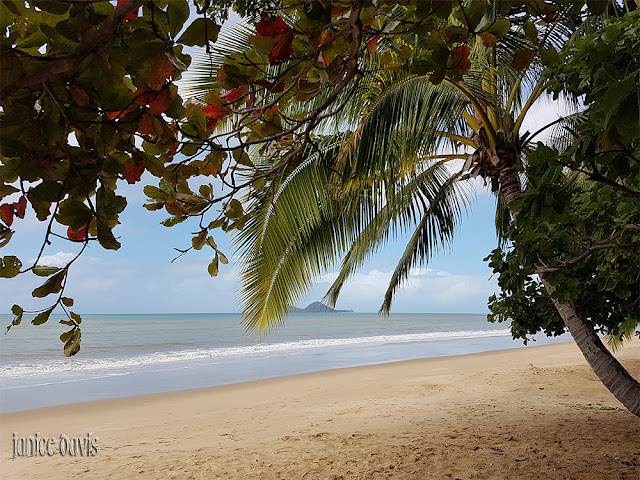 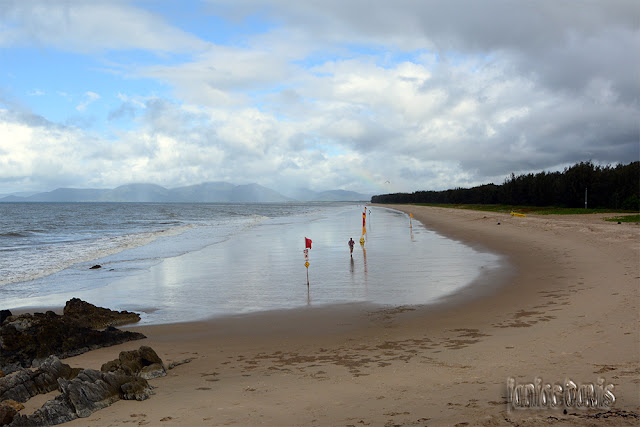 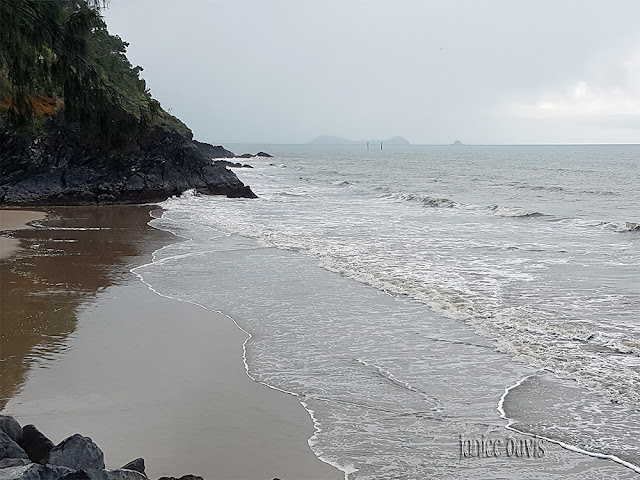 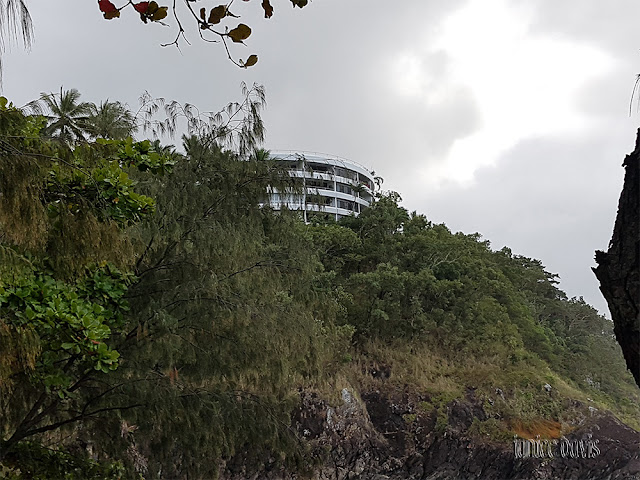 The above 3 photos are of Yorkey's Knob, Queensland. 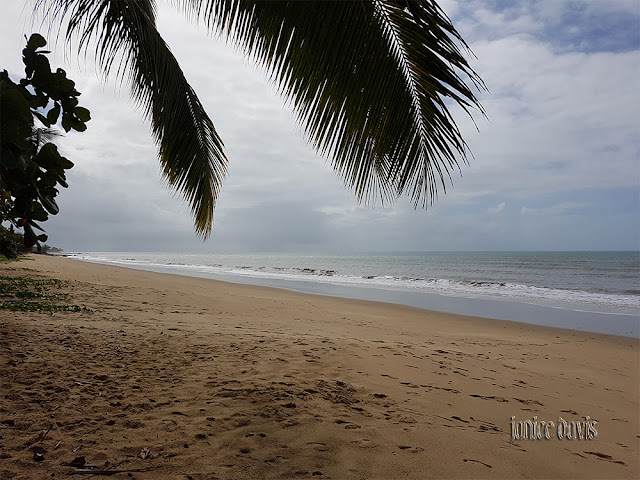 Standing on the sand at Ellis Beach taking photos and I felt as if something was crawling up my left leg, looked down and there all these large ant were crawling up my leg - they were pretty as in different colours and for the life of me can't think what type they were.  Thank goodness they were harmless.
Posted by Margaret D at 00:00 48 comments: