Going away at Easter time this year we went through the town of Ross in the midlands of Tasmania, a beautiful historical town.

Ross was founded in 1812 and is about 87km from Launceston where we live and further from Hobart the State Capital down south.
In 1812 a garrison of soldiers was stationed at the ford of the Macquarie River to protect the development of the future town.  Buildings were soon established and in 1821 the settlement was proclaimed the town of Ross by Governor Macquarie.  Ross was the name of the parliamentary seat of his friend H M Buchanan of Loch Lomond, Scotland.

Ross was ideally situated in a central location and easily accessible from Northern and Southern Tasmania.  Good flat country for farming and the Macquarie River at it's feet.
The Government established a large farm in the district of 20,000 acres for agriculture and breeding purposes.  The land was broken up in 1830 and sold off to private landholders.
Horses and coaches were changed during the long journey to the north or the south.
Ross also had a strong military presence in the village/town some lived there. 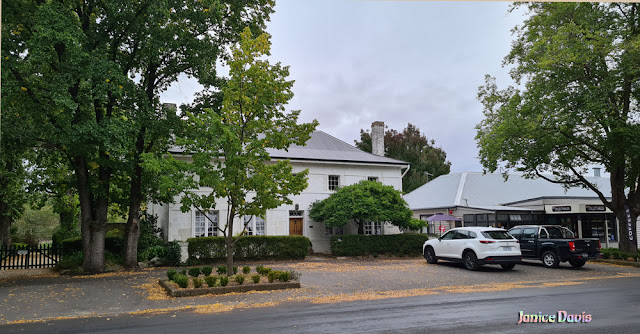 A house above, I always take a photo of at least one house in Ross when visiting.  The hotel below. 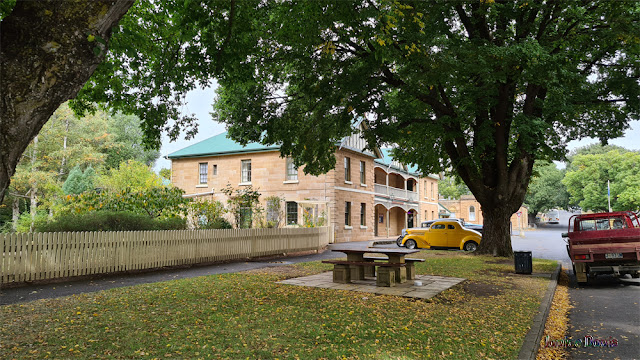 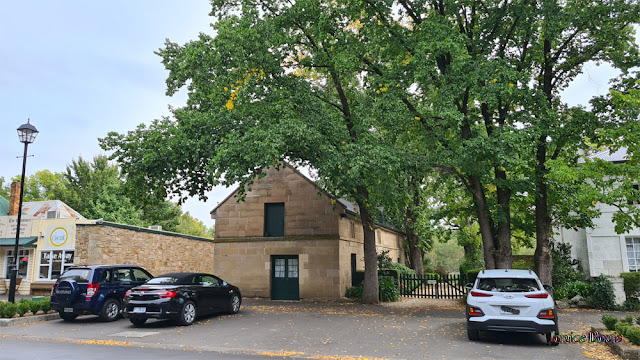 Accommodation place above and the place where you buy petrol/diesel plus a general store below. 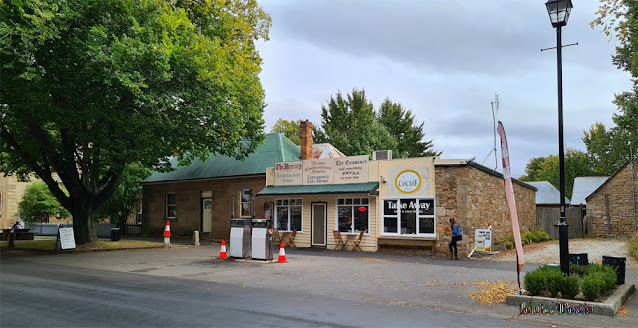 We are home again after another lovely holiday of 18 days in Huon Valley Caravan Park, Tasmania where we spent Easter. Weather was beautiful but nights were a big chilly.
Lots of activities for the children, the adults were kept busy also.
The Easter Bunny arrived in a Helicopter with Easter eggs for the children.
There was a Duck Race in the river and also a Ticket to be found in the sand, the finder of that ticket won a bike - there were a couple of bikes to be won along with Hampers.
The photos I'm showing are someone else's. 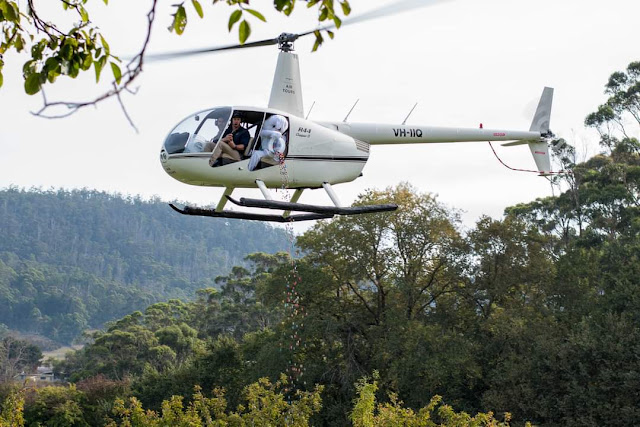 Can just see the eggs falling out of the sack onto the ground, there were 1,000 Easter eggs. 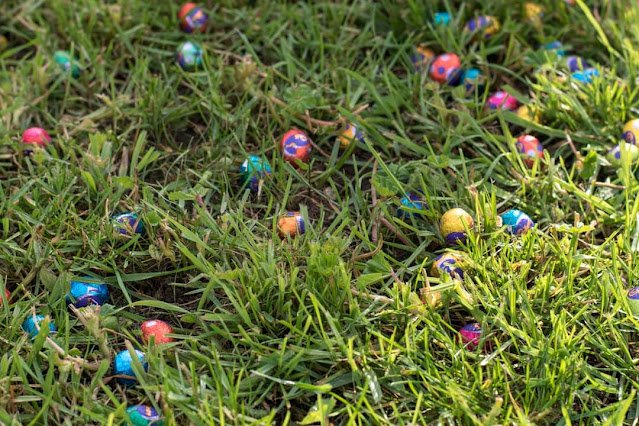 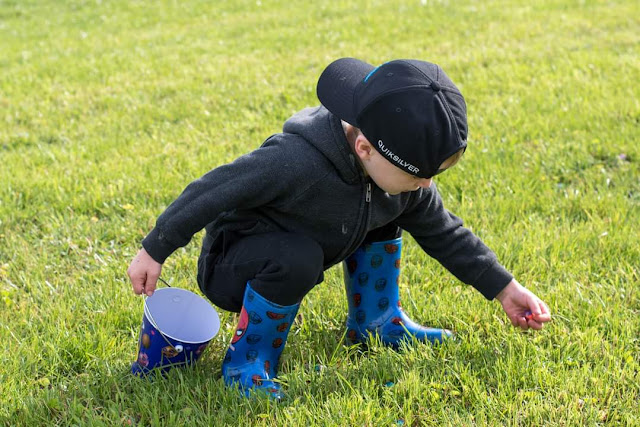 Children and adults collecting the eggs The duck race in the river, each person who participated was given a number that corresponded with a duck and the first duck to reach the finishing line won a bike. 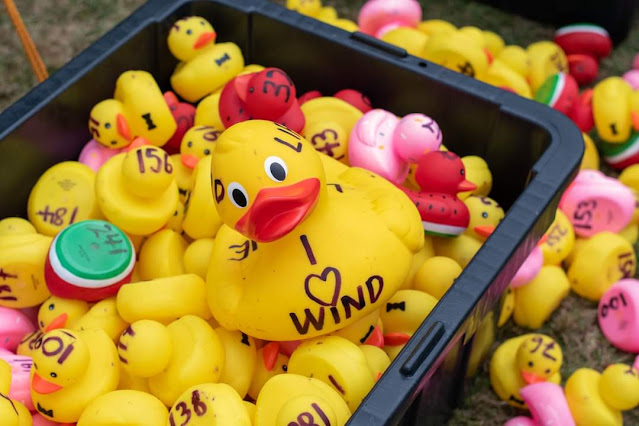 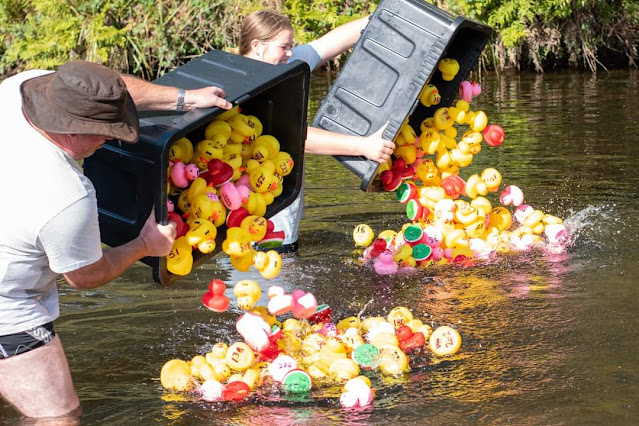 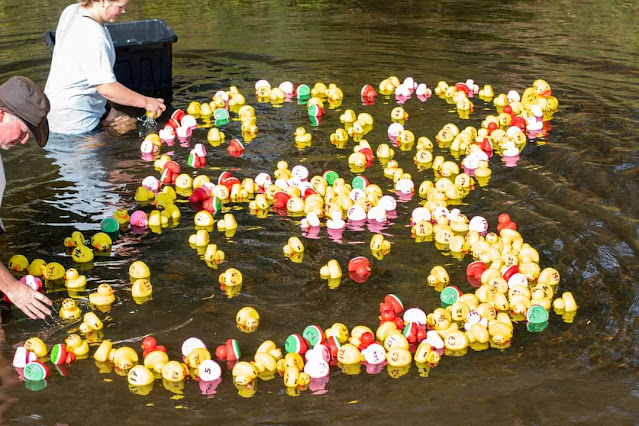 The Owners of the Huon Valley Caravan Park and a lady who won a hamper in the duck race.
The young girl was the winner of the duck race and her prize was a bike. 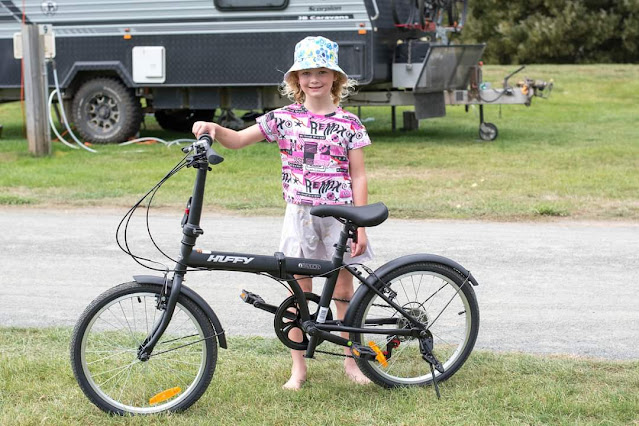 In the above photo the people are looking for a ticket hidden in the sand, some resting though - the ticket was found by the man in the black top below, he's with his son 'the winner' of a bike, with the park owner. 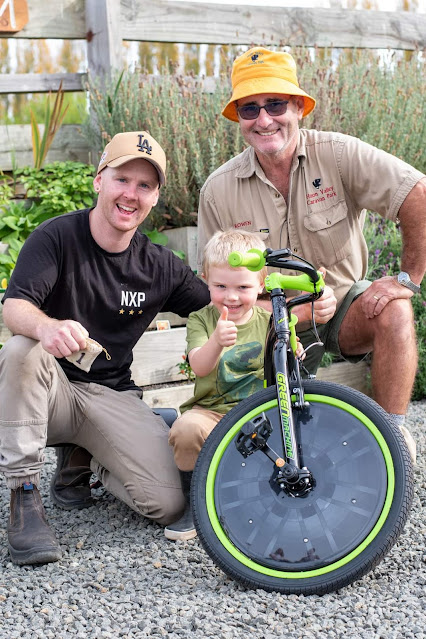 Today is ANZAC Day in Australia, a day we especially remember service men and women who have served our country. ANZAC stands for Australian New Zealand. New Zealand is not a part of Australia and we here in Australia require a Passport when going to New Zealand.
ANZAC Day – 25 April – is probably Australia's most important national occasion. It marks the anniversary of the first major military action fought by Australian and New Zealand forces during the First World War.

When war broke out in 1914, Australia had been a federal commonwealth for only 13 years. The new national government was eager to establish its reputation among the nations of the world. In 1915 Australian and New Zealand soldiers formed part of the allied expedition that set out to capture the Gallipoli peninsula in order to open the Dardanelles to the allied navies. The ultimate objective was to capture Constantinople (now Istanbul in Turkey), the capital of the Ottoman Empire, an ally of Germany.
The Australian and New Zealand forces landed on Gallipoli on 25 April, meeting fierce resistance from the Ottoman Turkish defenders. What had been planned as a bold stroke to knock Turkey out of the war quickly became a stalemate, and the campaign dragged on for eight months. At the end of 1915 the allied forces were evacuated, after both sides had suffered heavy casualties and endured great hardships. Over 8,000 Australian soldiers had been killed. News of the landing on Gallipoli had made a profound impact on Australians at home, and 25 April soon became the day on which Australians remembered the sacrifice of those who had died in the war.
Although the Gallipoli campaign failed in its military objectives, the Australian and New Zealand actions during the campaign left us all a powerful legacy. The creation of what became known as the “Anzac legend” became an important part of the identity of both nations, shaping the ways they viewed both their past and their future.
Anzac Ceremony:
At the Australian War Memorial, the ceremony takes place at about 5am and or 10.15 am in the presence of people such as the Prime Minister and the Governor General. Each year the ceremony follows a pattern that is familiar to generations of Australians.
A typical Anzac Day ceremony may include the following features: an introduction, hymn, prayer, an address, laying of wreaths, a recitation, the Last Post, a period of silence, either the Rouse or the Reveille, and the national anthem. After the Memorial’s ceremony, families often place red poppies beside the names of relatives on the Memorial’s Roll of Honour, as they also do after Remembrance Day services. 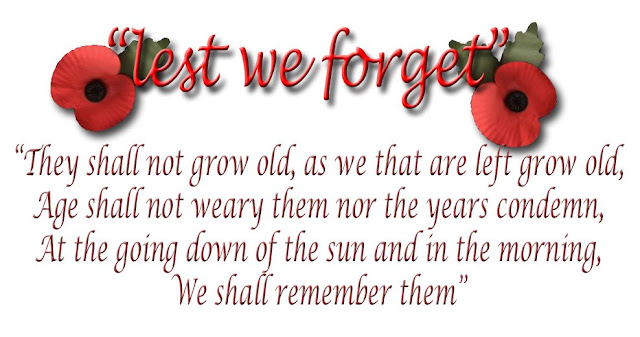 Made a few Easter Graphics over a few years so sharing them with you.
Have a safe and Happy Easter. 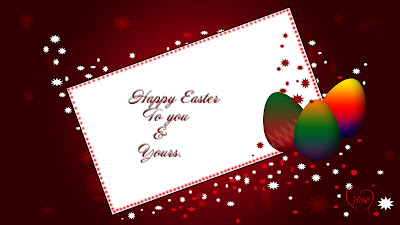 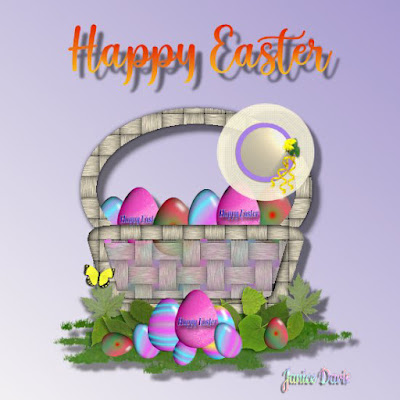 Several of you had the correct answer, thank you for guessing and those that also tried, for those who are waiting the answer is a Tasmanian Bat which are very small and I didn't get a photo of it as only my husband saw it.  We all I am sure know what a Bat looks like.  Husband hasn't  seen it since and mostly won't ever see another.

We've turned back our clocks 1 hour and now the mornings will be cooler but the evenings will be longer which we will enjoy.  Not so much the cooler mornings.

These photo were taken the day after Christmas Day December 2021 at the Huonville Caravan Park.  Looking Right and then the opposite way, Left.

We are off again to the same place for Easter, just my husband and myself leaving tomorrow (Tuesday) - so see you when we return in just over 2 weeks time, then I will continue  posting.

Have a wonderful Easter, keep safe. 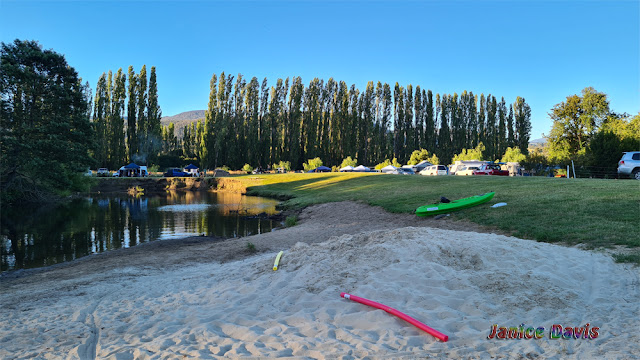 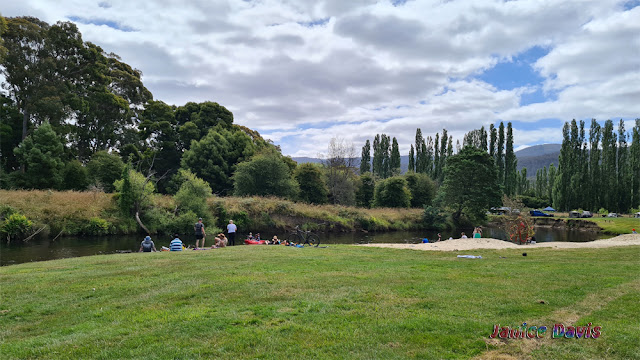 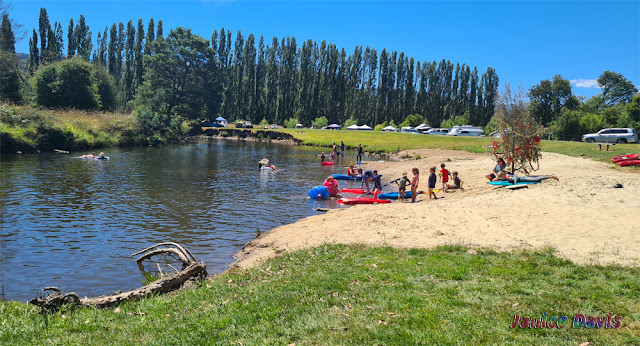 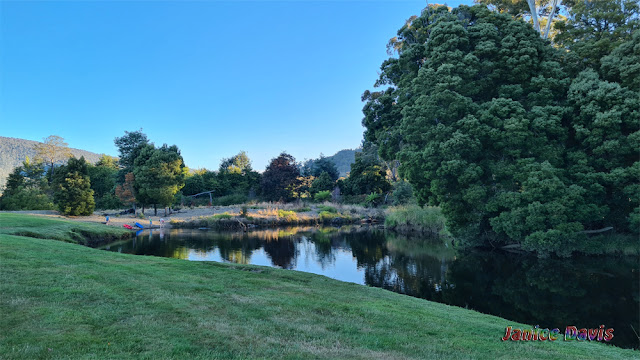 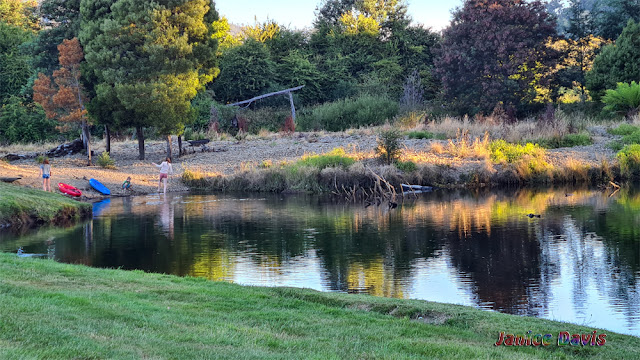 Christmas Day December 2021 a game of Cricket on the Green  - just one family playing more people joined in later.
2nd photo Miss E on Christmas Day looking for wee fish in Little River and yes, she found some. 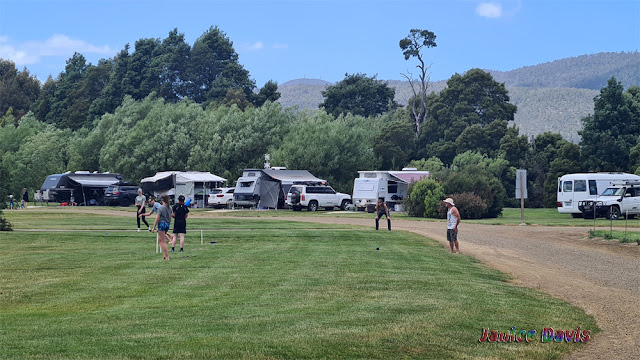 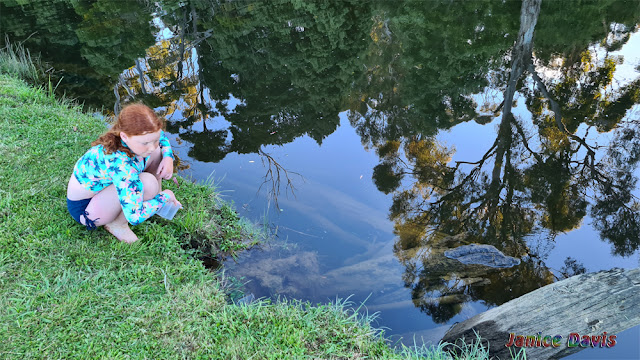 Hope these two video have come out alight - don't often do videos but wanted to give them a try.

A few videos of the two grandchildren who were on holiday with us at Christmas time December 2021.
Miss E loves slime, so she is adding glitter to her slime she is making.
Miss E and Mr Z
It's hard to believe but my husband was putting away the outside umbrella into the shed when he saw 'eyes' peeking at him when he put down the umbrella.  With these 'peeking eyes' came a body as big as a mouse, that body and eyes landed on the floor of the shed, shook itself and flew off into our barbecue area attaching itself to a top corner of that covered in area then it flew away - so what was it?
A clue, something we don't see here in suburbia and something I've never ever seen in Tasmania, Australia..Just have a guess and I'll tell you next post..
Posted by Margaret D at 00:00 42 comments: