Amazing what one finds when cleaning out my late dads cupboards.  Watkins Extract of Lemon, must be 30 years old or more.  I discovered this can still be bought.  Was amused at the Alcohol content at 85% which still stands today.
Was wondering do many people use this Extract of Lemon in their cooking today! 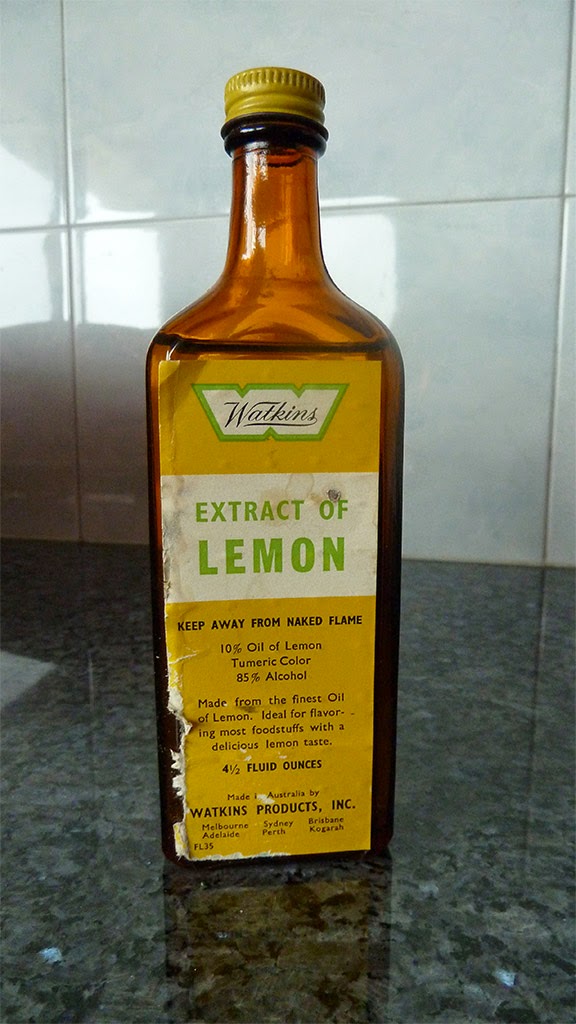 Email ThisBlogThis!Share to TwitterShare to FacebookShare to Pinterest
Labels: Lemon

Mt. Roland towers above the rural town of Sheffield in North Western Tasmania, Australia. Rarely have I seen snow on Rowland. The Mountain is a mere 1234 meters high. 4048ft. There are many bush walking tracks which lead to many places plus Mt. Roland can be seen from many roads. 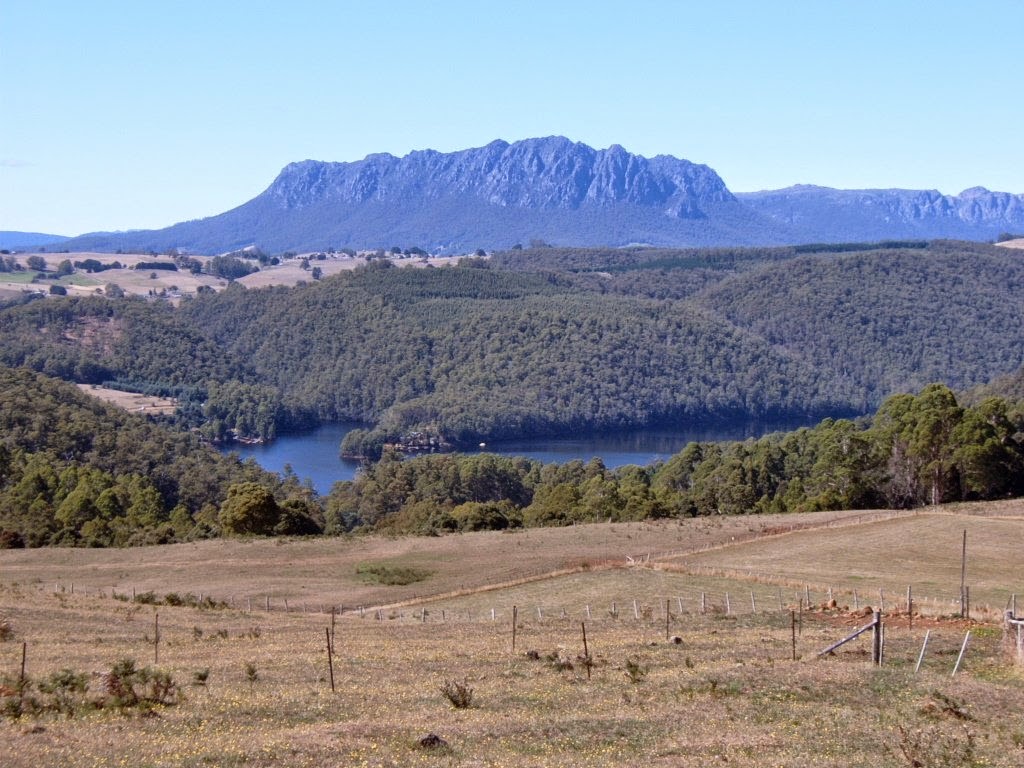 A Place called Stoney Rise at Devonport, Tasmania.  These houses are about 6 years old. Thought I would share with those that pass this blog, that way you will know how the houses are built these days.  One family lives in each home, and they pay it off at the bank over time.  In Australia many people own or will own their own home - it's the Australian Dream.  Also the view they have of Bass Strait and the City of Devonport. 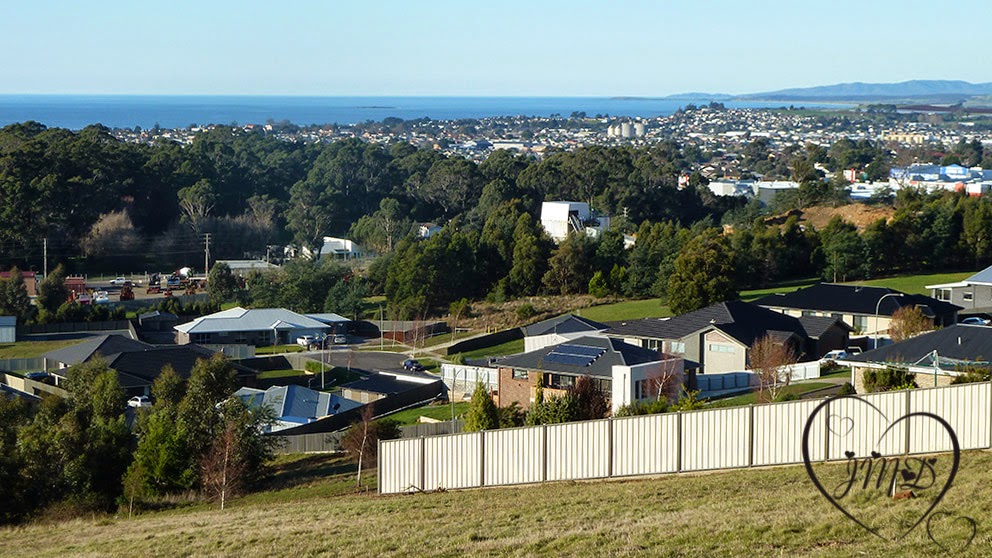 Today was my Father's Funeral.  It was lovely as funerals go.  The Priest said Mass, it was a beautiful one..  A lone Piper piped as my father's coffin was brought into the Church by 8 Police Pall bearers.  The white roses opened to near full covered the coffin. An Inspector Police Cap plus flag was on the coffin, all looked lovely.

As we the Congretation were all seated the Irish Blessing began, Roma Downey it was certainly fitting for the occasion.  The priest began his mass....then a song sung by Tommy Fleming was sung called You Raise Me Up, a lovely rendition.  Holy Communion, and as that was taking place, Andre Bocelli sang with the Morman Tabernacle Choir, The Lords Prayer.  Then Euolgys by 4 people which were short as requested by me....as we left the Church, Andre Bocelli singing, It's time to say Goodbye. As we entered the foyer the lone piper again plus a Police Guard of honour from the Church doors to the Coffin.

Everyone went to the Graveside. Seating was provided, the lone piper played Amazing Grace as the coffin was lowered.  I shed a tear, as did most :)

After that we all had a cup of tea or coffee plus plenty to eat across the road where the funeral people have a lovely building for such events.....a lot of chatter, memories people were telling me, such wonderful times.
Dad had been in the Police Force for 44 years, retired at 65, and died aged 90.....was declared legally blind in 2006, but of course couldn't see a thing for many years before that.

So now I move forward....as I have had my 'wings clipped' since before my Mother went to Heaven 6 years ago.

Thanks to everyone who prayed for my father when he was ill, and sent their good wishes to me.
May God Bless you all....
Posted by Margaret D at 21:20 14 comments:

Lake Pedder was once a natural lake, located in the southwest of Tasmania, Australia but the name is now used in an official sense to refer to the much larger artificial impoundment and diversion lake formed when the original lake was expanded by damming in 1972 by the Hydro Electric Commission of Tasmania.
The new Lake Pedder has an area of about 242 km and it is considered to be the largest freshwater lake in Australia.

My two cousins, brother and sister, along with his wife and her husband visited the lake and we stayed in a caravan each at that time for two nights.  The weather was hot at 35degC at 6pm in the evening so all of us went for a walk in lake to cool off.

That is coarse sand that you see in the foreground.

I am in the pink top, and my cousin was tipping water over me - he was always trying to torment me, but I loved every minute of it. 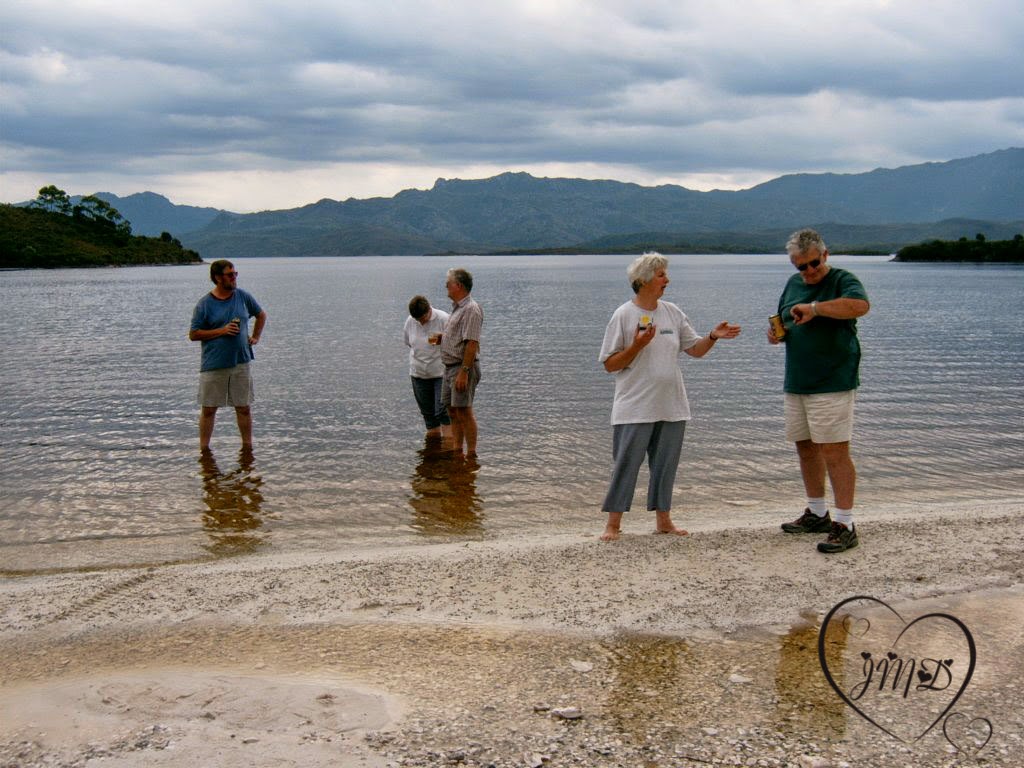 I have visited Mt. Field NP many times over the years, and of course digital cameras were not heard of back then, however I did have the opportunity when I obtained about my 3rd digital camera so was able to take a few photos at that time.

My husband and I used to stay up on the mountain in a cabin with our friends in the winter time for several days at a time.  There was a bit of snow back then, but not much.

The photo's I have chosen were taken when one of my cousins came with my husband and myself for a tour of Tasmania.  Cousin was thirsty after our long walk so drinking the pure water, but to do so you had to get as he did :) 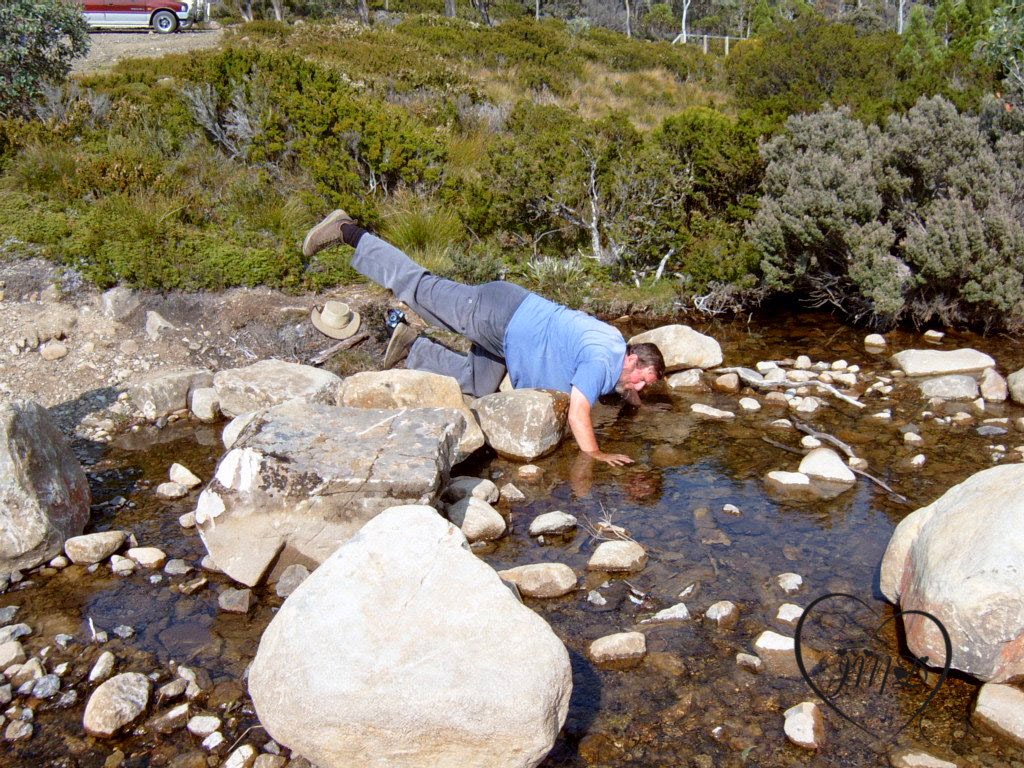 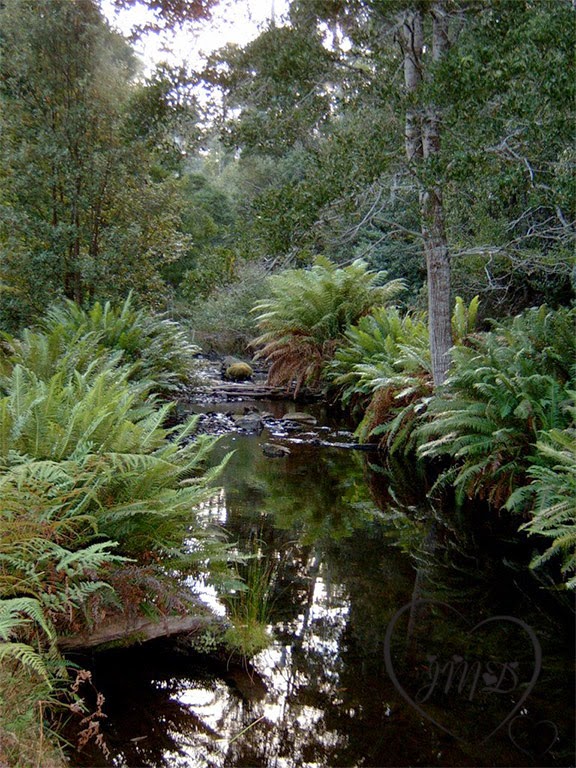 Below the mountain within NP there is this rather pretty stream.

Mount Field National Park was founded in 1916, making it, along with Freycinet National Park, Tasmania's oldest national park. The area around Russell Falls has been protected for its natural beauty since 1885, when it was set aside as Tasmania's first nature reserve. The last known wild thylacine (Tasmanian Tiger) was captured in the region in 1933. The reserve was called "National Park" before 1946, but was officially renamed to its present name in 1947
Posted by Margaret D at 13:47 9 comments:

On July 11, 2014 about lunch time my dear dad passed away with the Priest by his side.
No more pain, no more confusion.
I am ok, had my cry, a bit teary at times but I will get over that.
My husband and I had lunch down by the mouth of the Mersey River in Devonport, Tasmania after the phone call, then we headed to the 'home' to see my dad (after the phone call)...so life for me will be very different from now on.  6 years of traveling every week to my dads house, staying some nights, always carrying or having my mobile phone next to me - now not necessary.  Dad took ill on June 7, 2014. 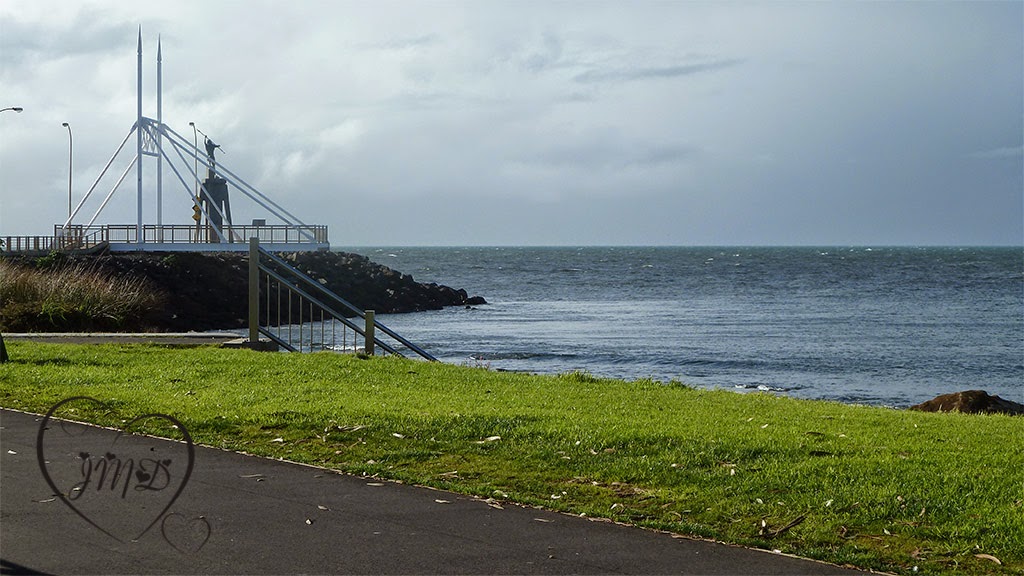 The view where we had our lunch. That is a Neptune statue.
Posted by Margaret D at 00:05 7 comments:

The Tasmanian devil is a carnivorous marsupial of the family Dasyuridae, now found in the wild only on the Australian island state of Tasmania.
The size of a small dog, it became the largest carnivorous marsupial in the world following the extinction of the thylacine in 1936. It is characterised by its stocky and muscular build, black fur, pungent odour, extremely loud and disturbing screech, keen sense of smell, and ferocity when feeding.

The photo I took some time ago at a Zoo here in Tasmania.  Watching them feed is amazing. 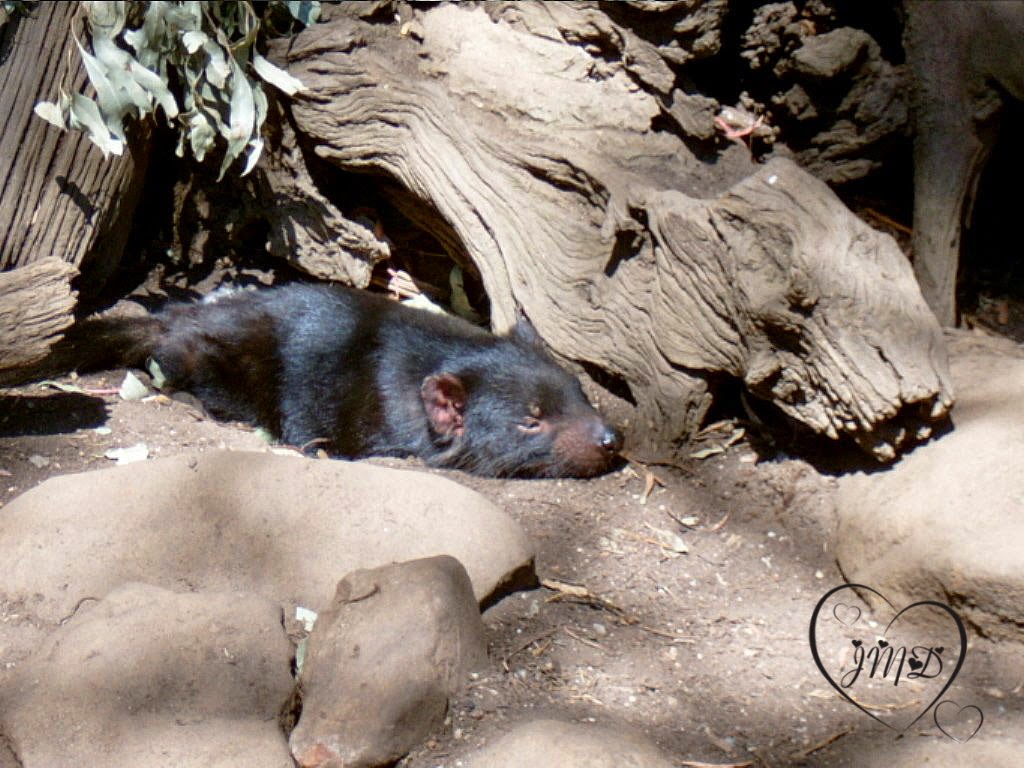 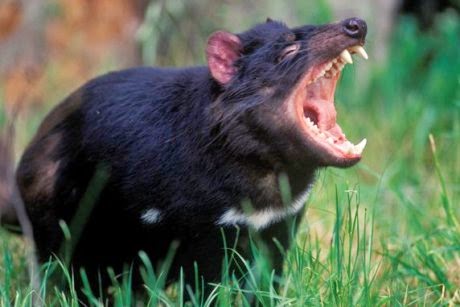 The photo above I found on the internet, it was on the ABC site.
Posted by Margaret D at 00:05 14 comments:

On the way to Burra in South Australia.

Update on dad....He has been moved back to his home city and into a Private Aged Care Home.  He has a lot of pain which is controlled with strong medication, which in turn takes my dad into fairyland. He is rather funny most of the time, he talks non stop and says things that doesn't make sense, but in there is a story of some kind.  If I didn't laugh, I would certainly cry, knowing that the drugs are 'talking'. Dad can just stand up with help only, use a walker with help, but spends most of the day in his bed, a far cry from what he was like at the beginning of June when he used to come shopping with me in the supermarket.
Dad has a private room, and today I bought him a TV so he can listen to it.

On the way into Burra in South Australia on our visit a while ago I was taken with the view of the green fields plus we spotted part of the old mine. 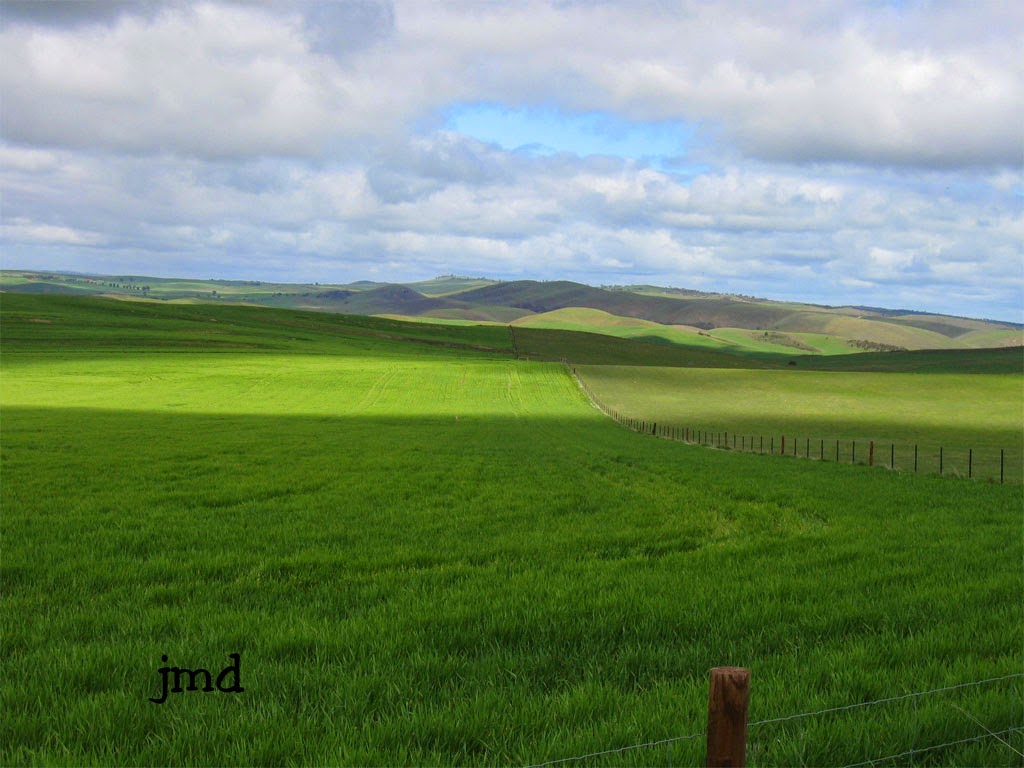 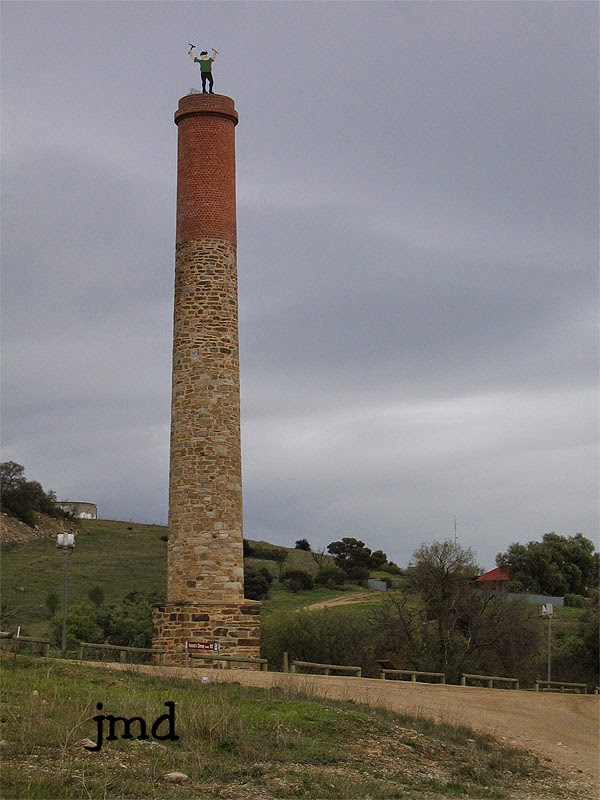 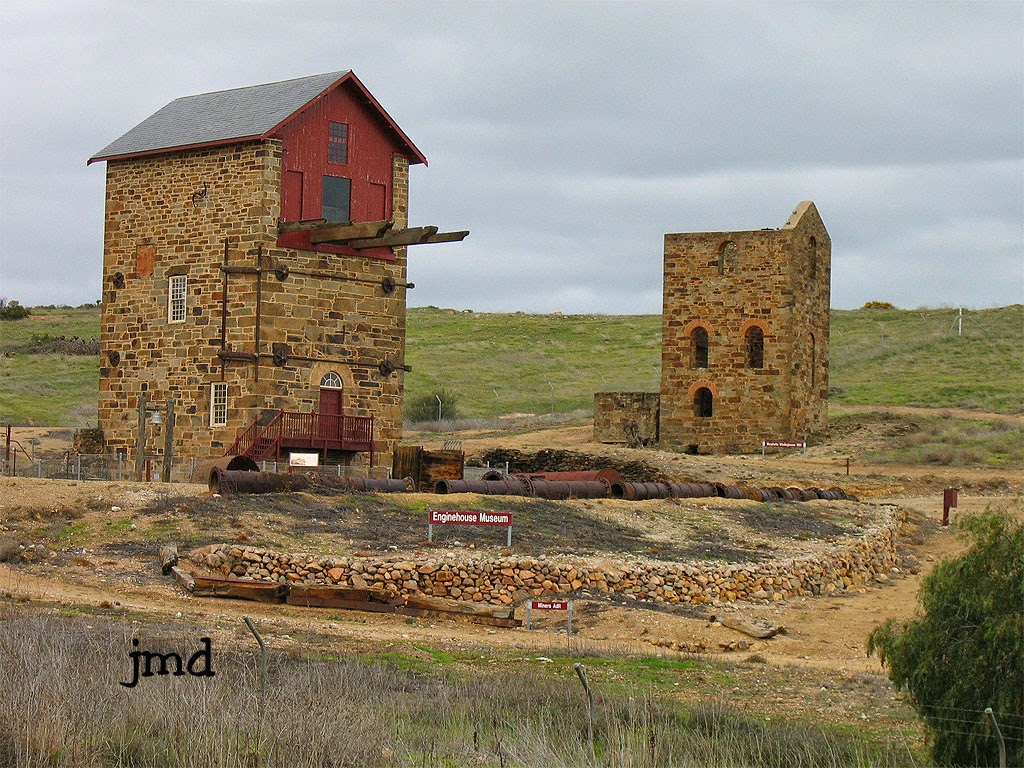 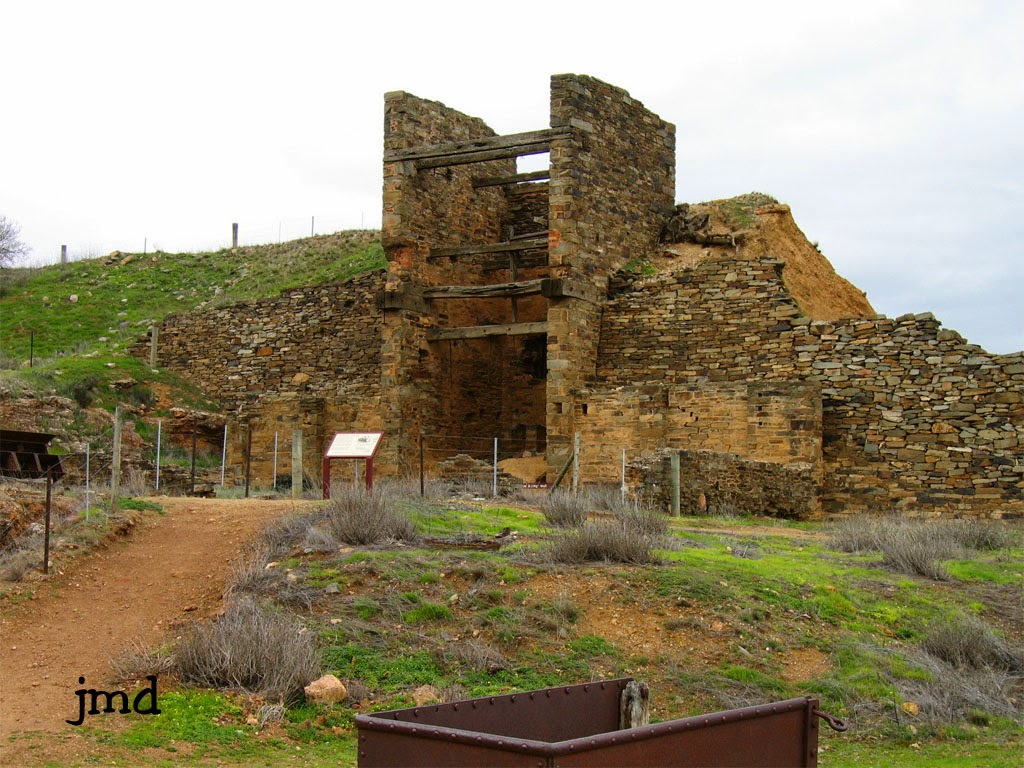 We have been to Burra in South Australia. It's certainly nippy there in winter. A cute mining town of the past which began in 1851.  The mine first closed in 1877, briefly opened again early in the 20th century and for a last time from 1970-1981. Miners and towns people primarily came from Cornwall, Wales, Scotland and Germany.
The mines supplied 89% of South Australia's and 5% of the world's copper for 15 years.  Now a pastoral and historic town, it's the centre for many communities. 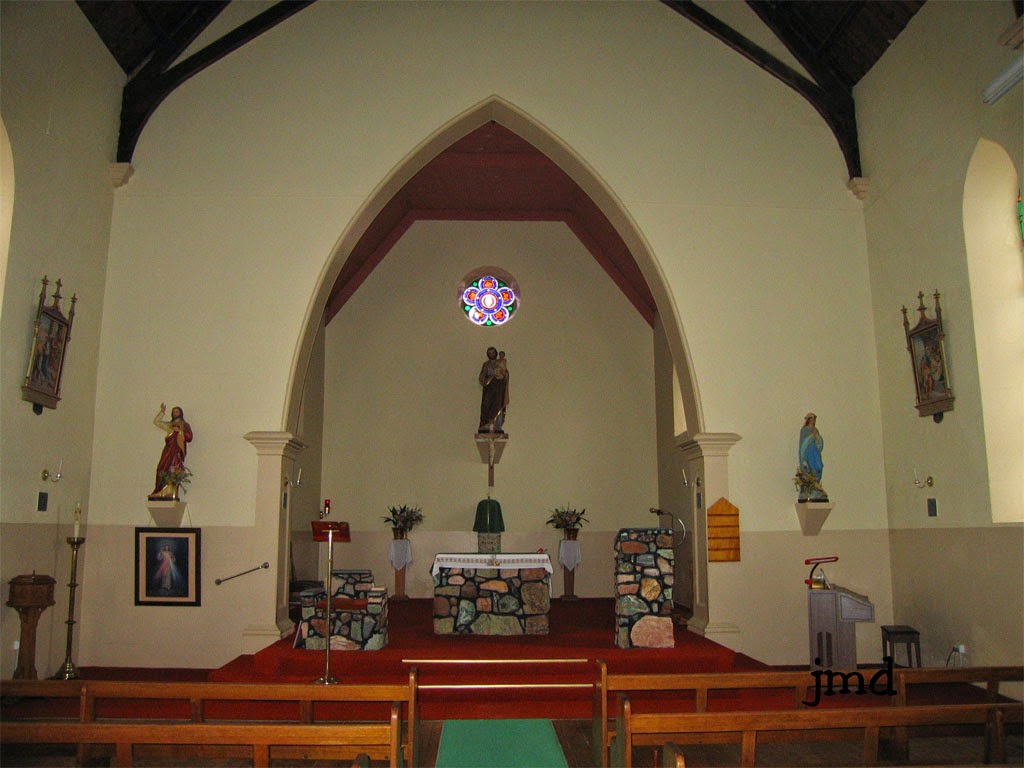 Inside the Catholic Church 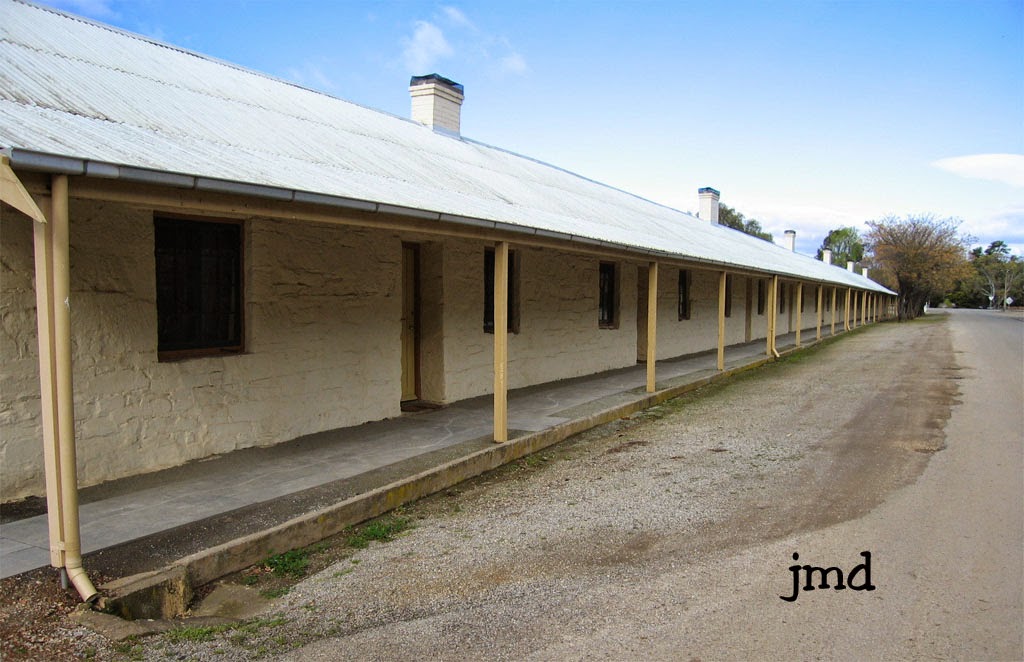 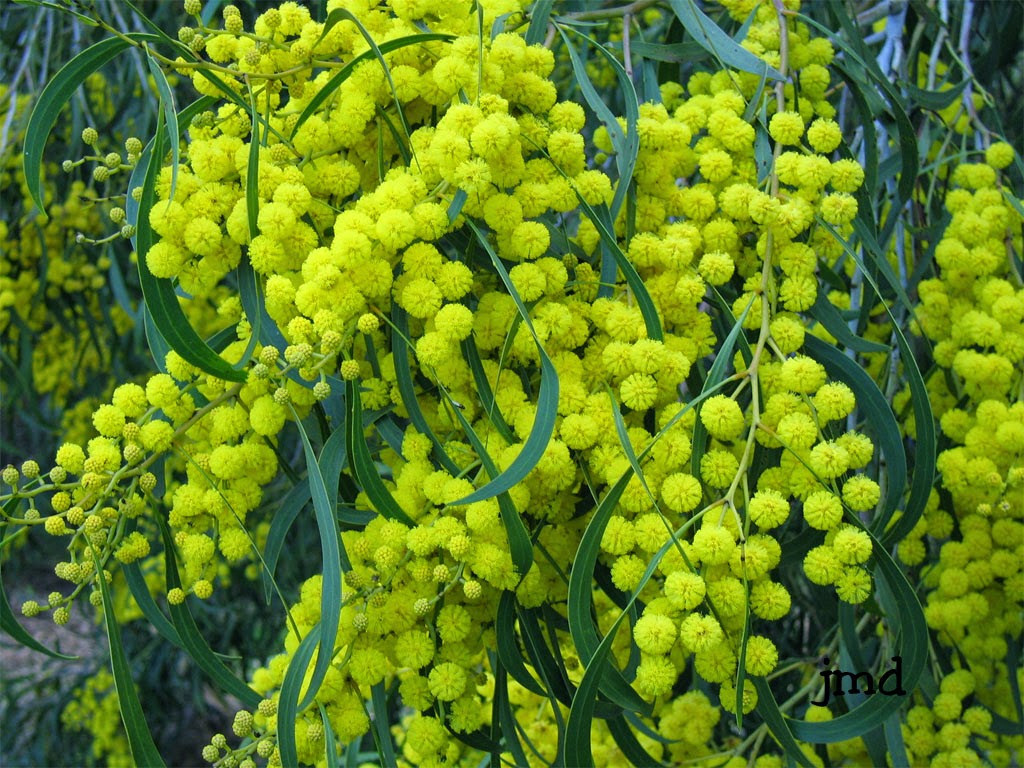 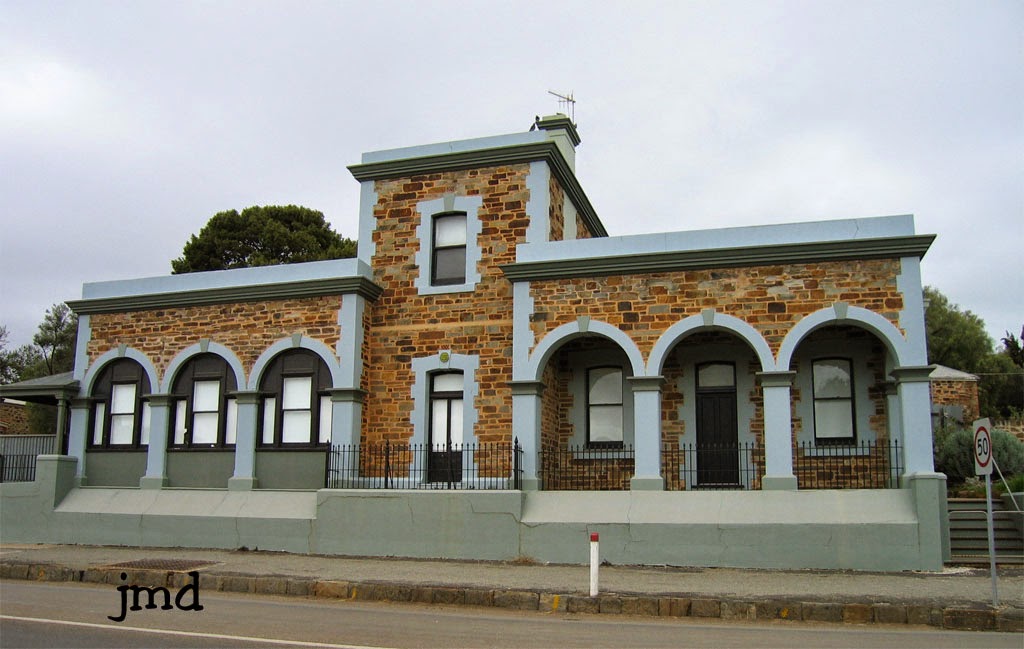 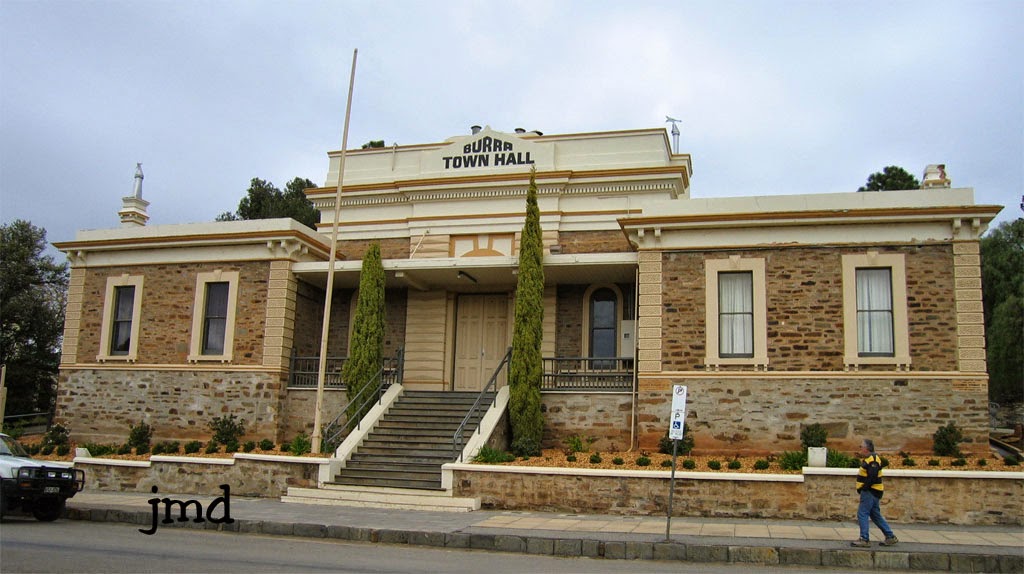 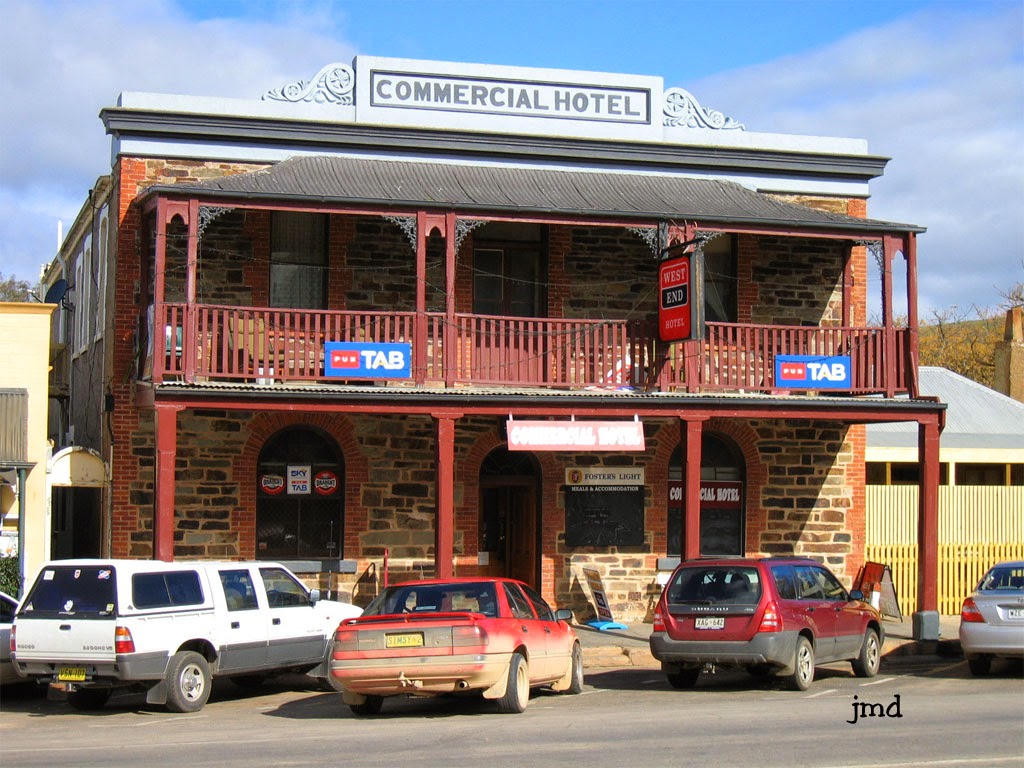 The View from Inside.

The view from the Private Room in the Private Hospital where my dad is....even though he can't see the view, I can and took the photos from inside the room through the window.
It's the view over looking part of Launceston, Tasmania. 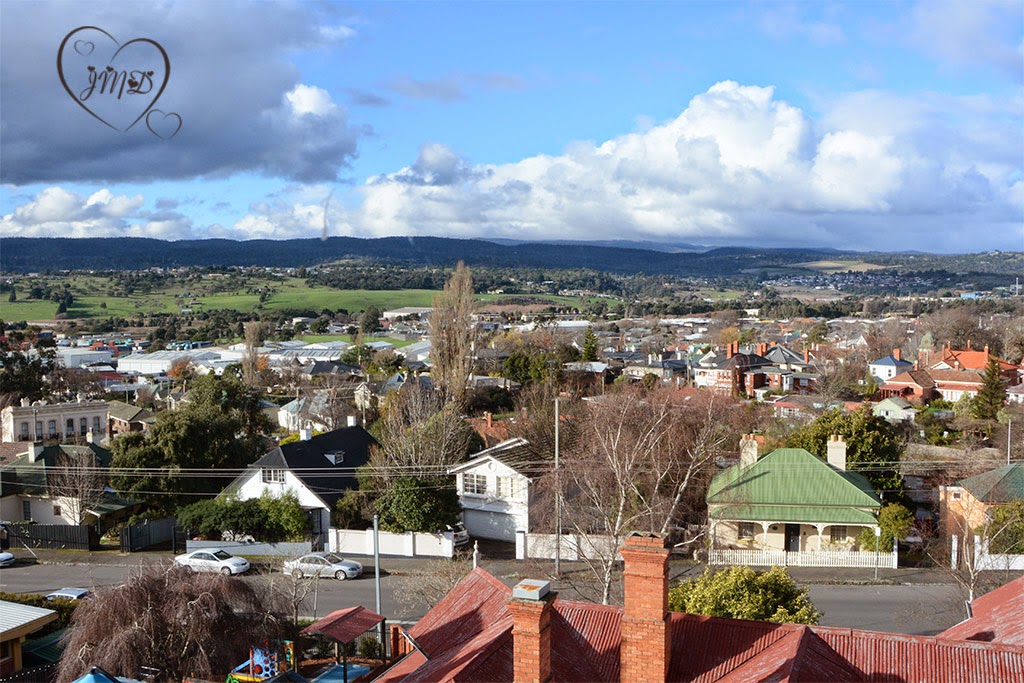 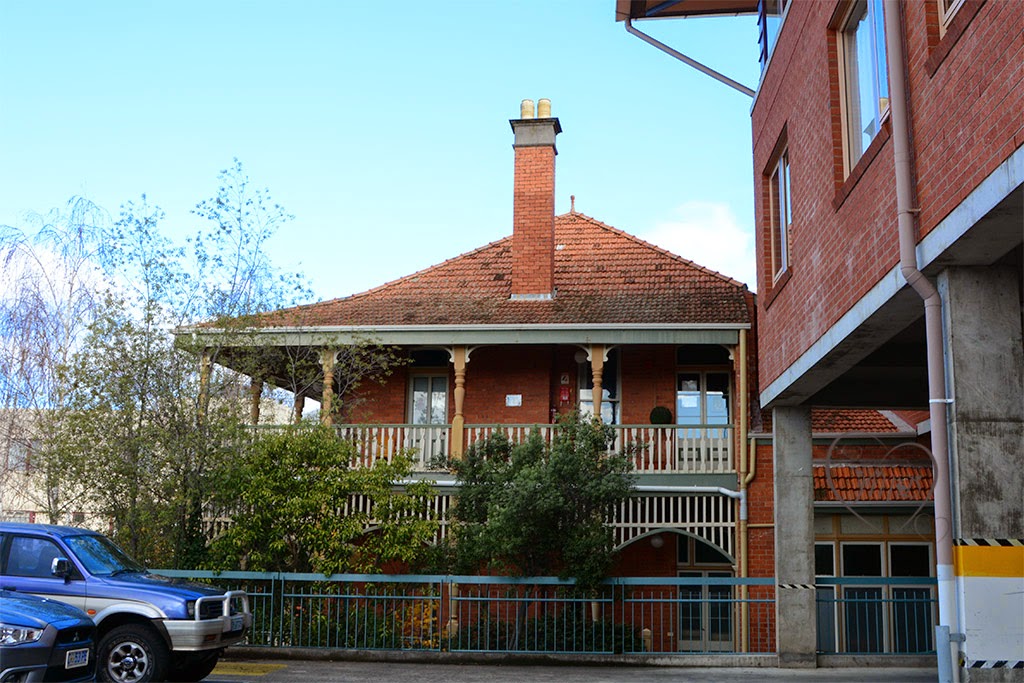 That building is called, Barclay House and is part of the Hospital. Part of below too. 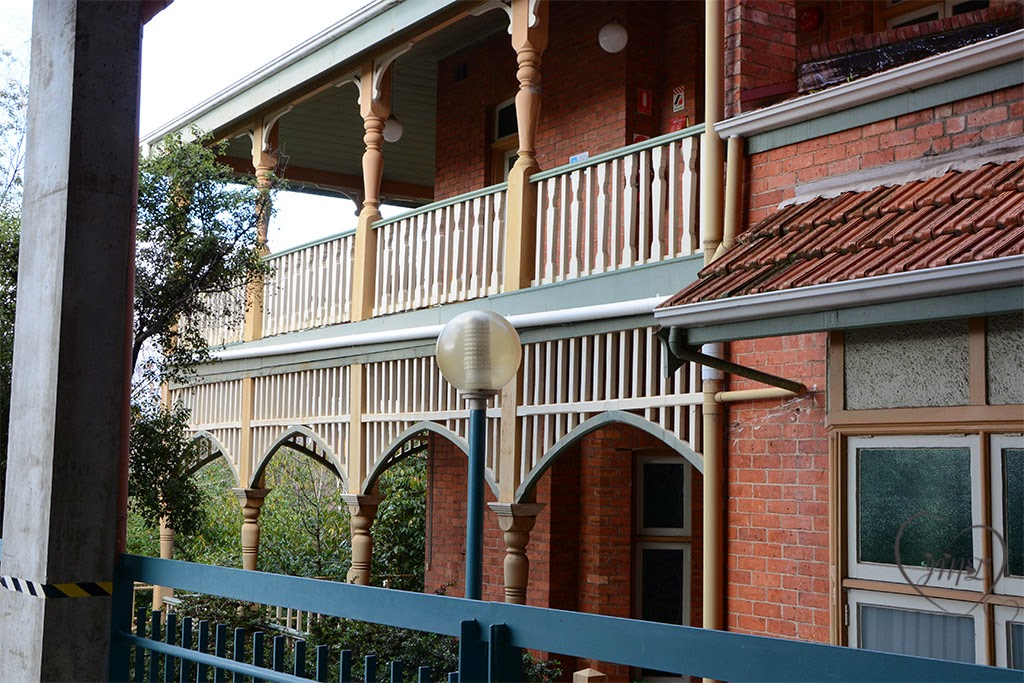 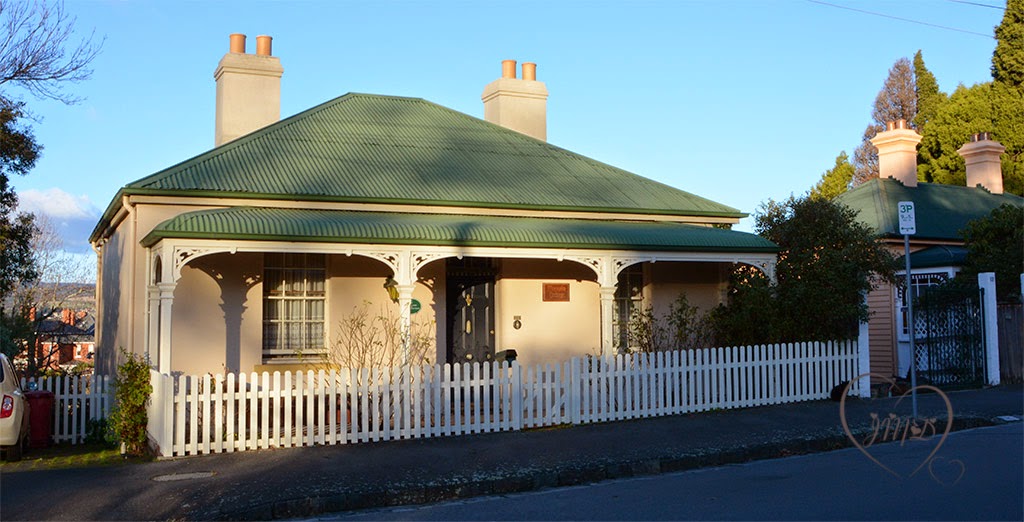 A house across the road. It's an older area of Launceston and the houses vary from rather large to small.  I hope to get more photos of the houses soon.
Posted by Margaret D at 00:05 24 comments:

It's been cool at 13degC, F55.4 during the day, at night it's been colder but no frost where I live as yet!  It's a lovely time, as the first daffodils have bloomed.

An update on my blind dad - he is stable, in a Private Hospital for Palliative Care.  Strong pain tablets are given which help him.  He can stay there for 35 days, after that he may have to be moved somewhere else if he is still alive. My father said he's not afraid of dying and has a wonderful outlook on death, we have talked about it for hours. Yes, it's a hard time knowing that he is dying, but God will take him, when God is ready :)
Today I am going to an Aged Care home in the city where dads home is to find out all about the fees. 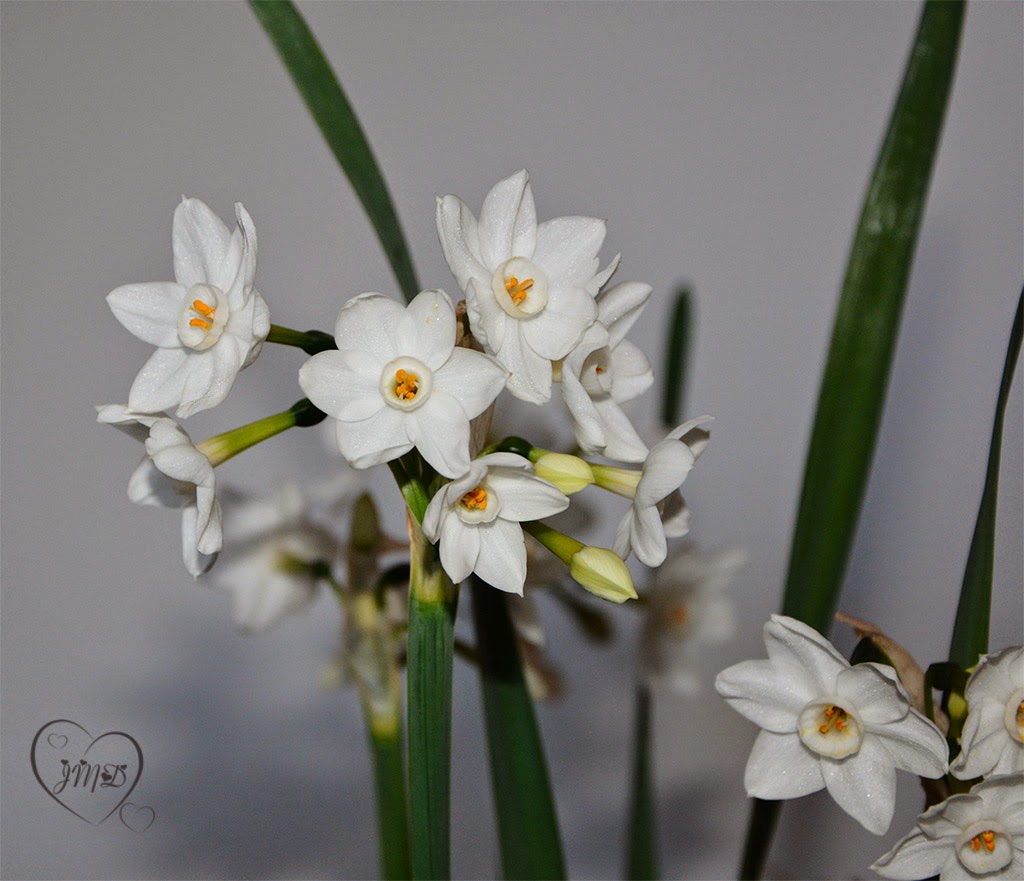