Evandale was originally established as a military post in 1811, it was known variously as Collins Hill, Patersons Plains, Gordon Plains, and Morven before the town's name was changed to Evansdale and eventually to Evandale in 1836 in honour of Tasmania's first Surveyor-General, G.W. Evans and declared a municipality in 1865. Evandale is 15 minutes from Launceston, Tasmania.

St. Andrew's Anglican (Church of England) Church was open in 1837.
The building was used as a place of worship on Sundays and a school room during the week days. The new building was constructed with bricks which were obtained from the abandoned works of the Evandale-Launceston Water Tunnel. In addition the roof was covered in shingle.

There were two rooms, the chapel/school room and the master's room. The building was situated at the end of Church Lane in what is now the back of the Rectory. The initial building was later used as a Sunday School before being demolished around 1910.

In October 1838, a larger Church of England was required with a petition requesting the Government assist in the erection of a more suitable building. Consequently work began on a new church in 1841. It was a red brick building with a square tower and the building was completed about 1844.
In 1869, discovery of large cracks were discovered which was caused by faulty foundations, and the church was finally demolished in 1871. The foundation stone for the present church was laid down on 30 November 1871 and building commenced using many of the original bricks. In May 17, 1872 the new church was consecrated and dedicated to St. Andrew. 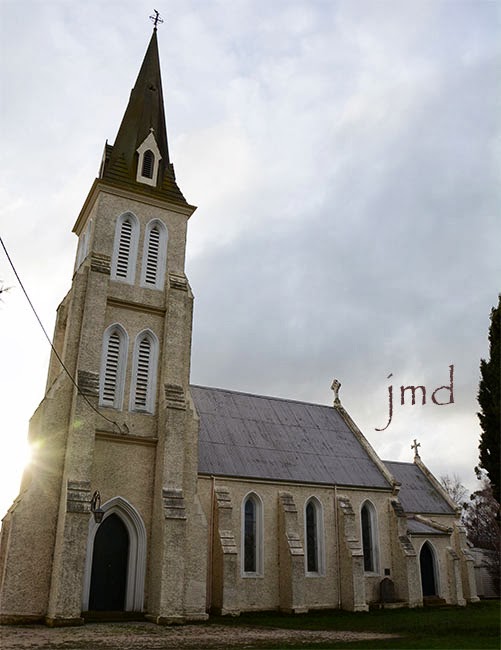 The door was locked so I couldn't go inside to take photos.

St. Andrews Uniting (Presbyterian) Church..
Reverend Robert Russell was a young Scot when he arrived in Evandale to commence his parish duties on the 9th April 1838. At that time there was no church building and services were then held in private residences.
The Scottish Community of Evandale had raised funds for the building of a Kirk (Church) and along with a grant from the Government this enabled the laying of a foundation stone in 1838 by the Governor, Sir John Franklin and from this the Kirk (Church) became a reality with the dedication of St. Andrews on 5th September 1840.
A much admired example of Greek Revival Architecture, St. Andrews is known as the "best preserved or restored" place of worship in Tasmania.
Since its door opened, St Andrew's has served the Presbyterian Congregation of Evandale and its surrounding environs and lately as the Uniting Church of Australia. Sunshine Coast Marathon and the Bird!

Today was the Sunshine Coast Marathon, and where we are was their turning circle.
The roads were closed from 4.30am till 12.30pm.
A full Marathon is 42 km (26 mile), participants ran for themselves and charity. There was also a half Marathon and fun runs.

The Rosella Parrot in the palm tree was feeding, I had to zoom in to get a good shot of it. Nearly every afternoon a lady comes with water and food for the birds, she sits at a picnic table and feeds them. 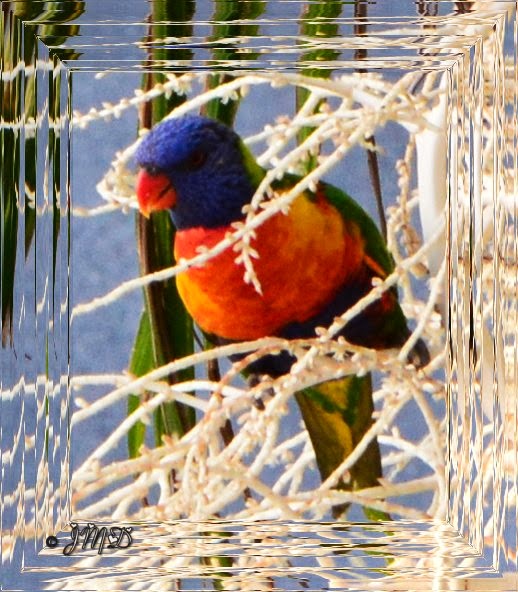 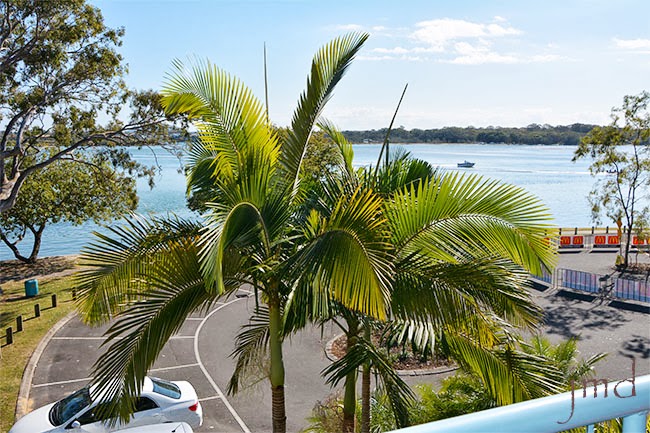 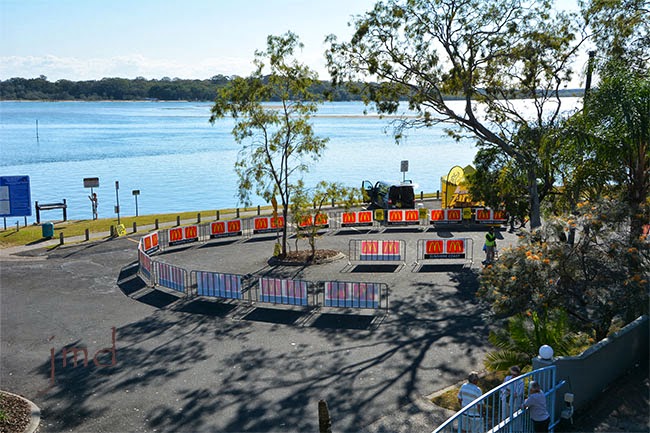 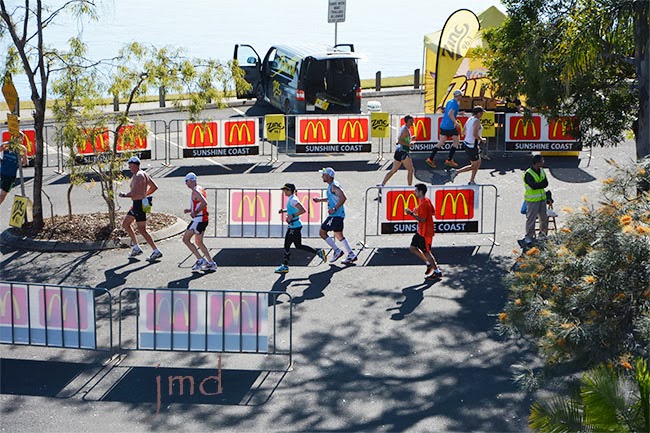 The fun things of old!

Years ago a group of us went to Coles Bay when it was free to enter that town on the East Coast of
Tasmania.  We arrived about midnight, set up camp only to find in the morning that the tent door was facing totally the wrong way :) Well we were anxious to get to bed the night before.

Someone decided to take a photo of me before I could comb my hair or wash my face, but it doesn't matter.
We all hopped into the Ski Boat that we bought with us after breakfast and went fishing way out to sea, it was calm then the next minute it was very rough so we headed for the beach and made it.  One of the motors decided it wasn't going to work, but the other one still did work so all was well.

The camera was the best we had at that time :) 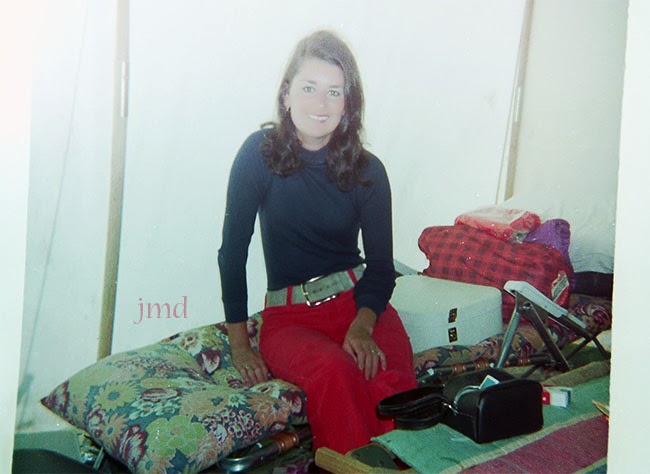 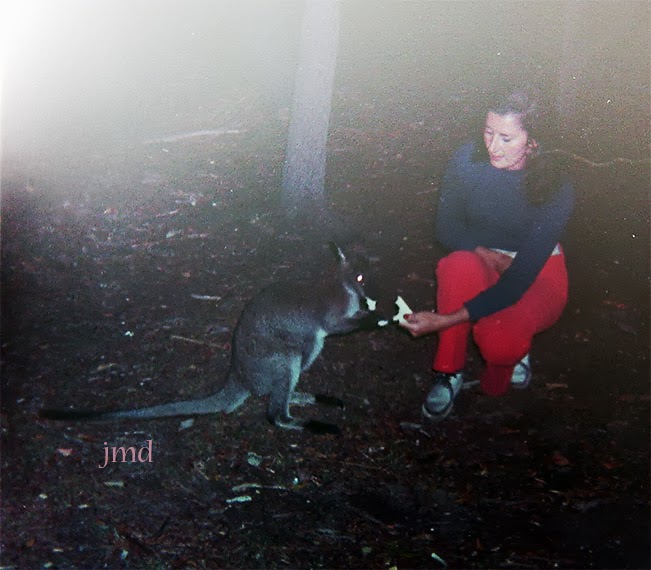 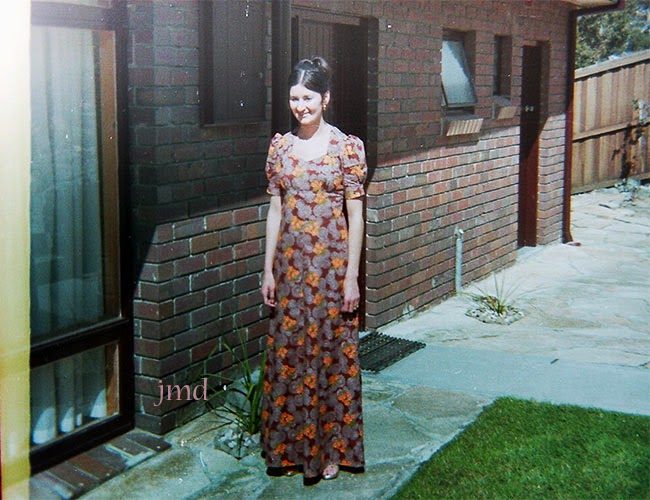 A photo of me in Hobart years ago at one of my cousins house.  It was at the time when long dresses/frocks were in fashion and at that time I made all my clothes, that way I could have a lot more.  I used to buy a pattern my size, make the dress, hang it up in the wardrobe and no altering was needed.  Can't say the same these days plus it's cheaper to buy clothes now, as the quality is not in the fabric that is available to buy.
Posted by Margaret D at 14:04 8 comments:

The Spit as it's known is located in Mooloolaba on the Sunshine Coast, Queensland, Australia.
It's where Jessica Watson the 16 year old who sailed solo around the world a few years ago in the Pink Lady, sailed to her home port.

On the way back from The Spit I took a photo of an Apartment as it was the only one lit up. 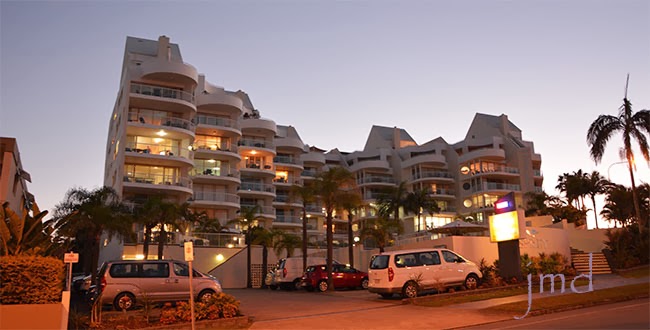 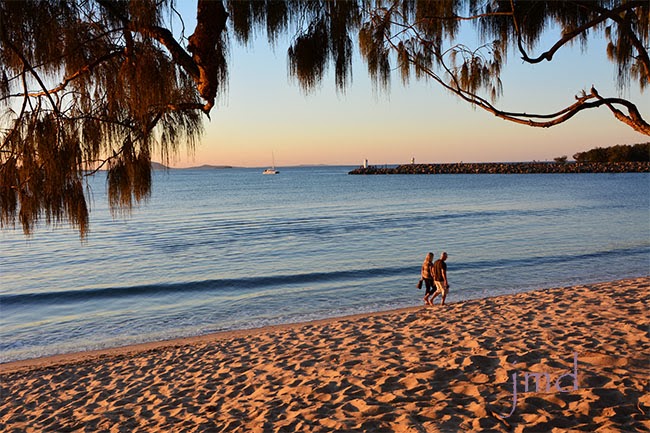 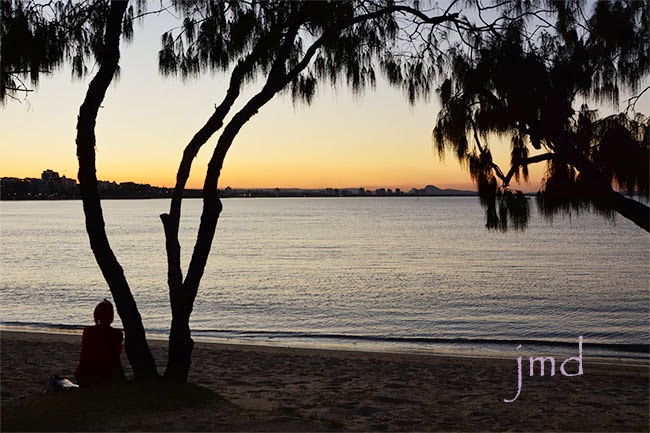 Many years ago a group of us went to Mt. Field National Park here in Tasmania for a weekend in the snow, stayed in a Cabin which had a table and a few chairs, then a huge door with bunks in the room where we all had to sleep, both males and females. What a good laugh we did have.
In the late evening many native animals came knocking at the door, so it was lovely to see them so tame and taking tit bits from our fingers.
From memory this was the first time I had seen snow as being able to touch it.

The photos are taken from slides so hence they are not that good. 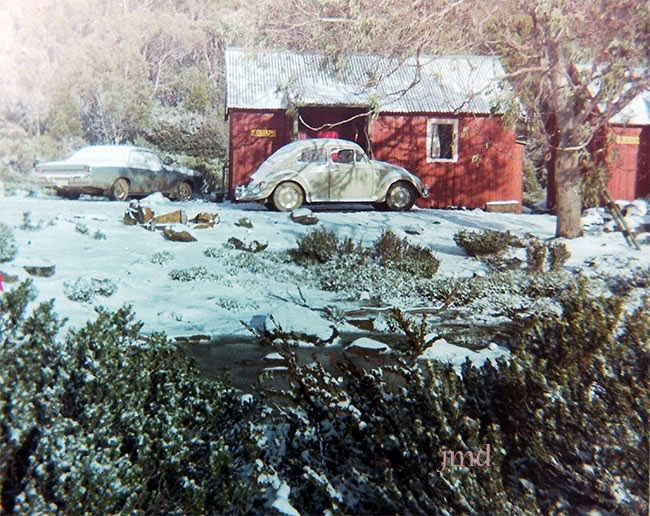 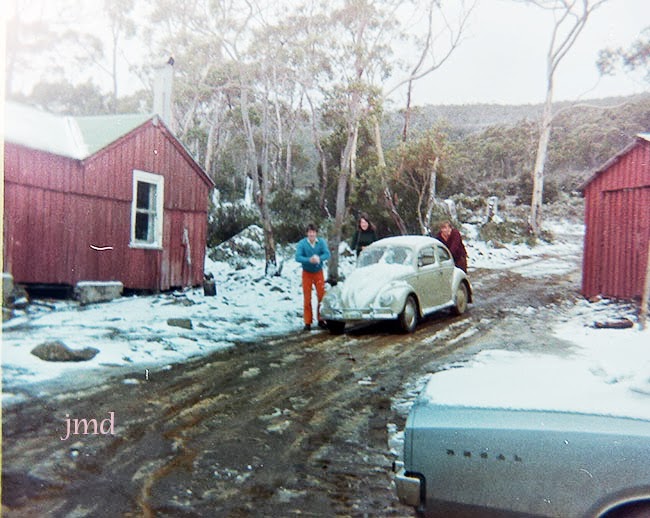 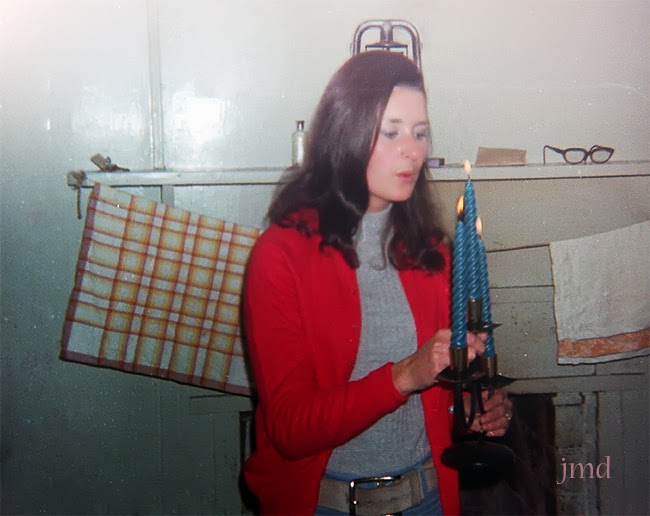 Yes, that's me in the cabin.

I rather like the Sunshine Coast in the State of Queensland, Australia.
Our youngest son lives in the area with his wife and their 3 children, so hence we visit each year if possible.  The photos are of some of the area. 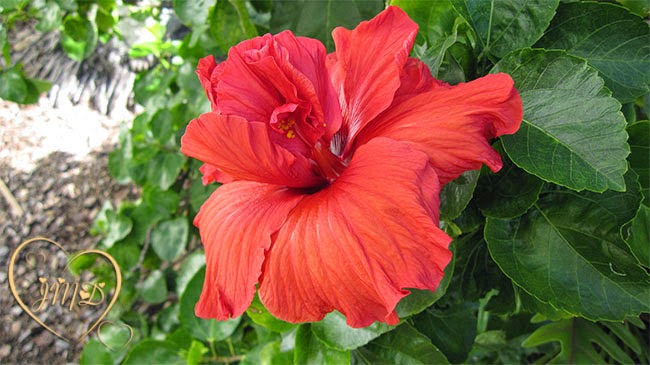 Lovely flower is the Hibiscus. 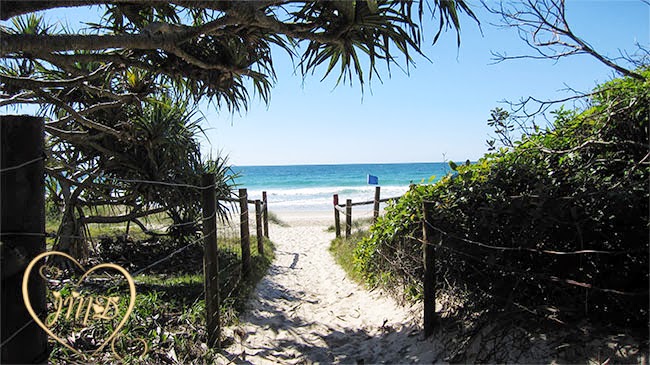 One entrance to a beach. 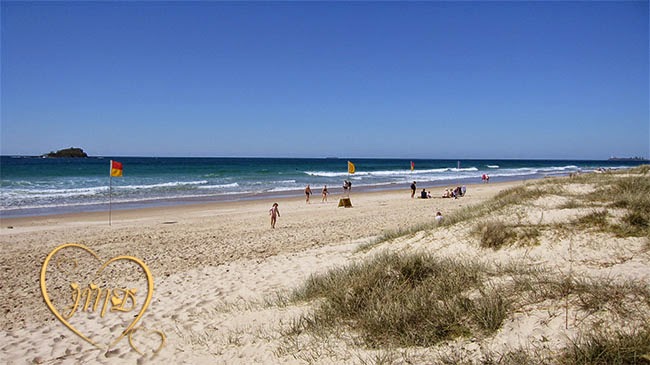 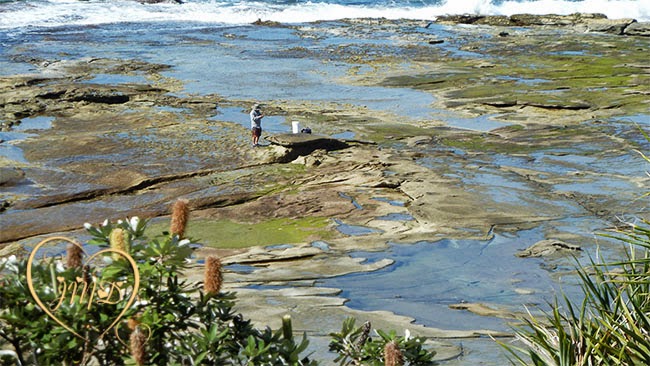 Fishing in another area. 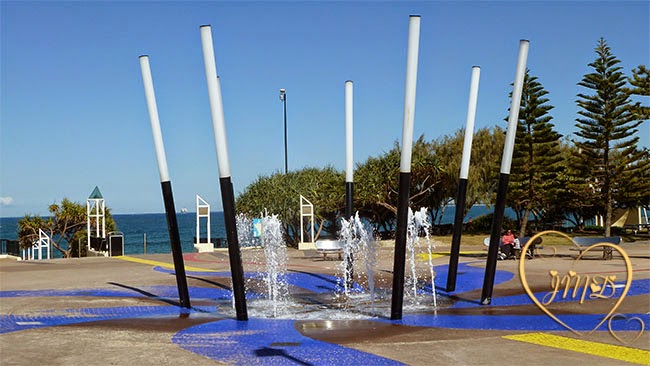 This is near another beach. The water comes in handy on a hot day.
Posted by Margaret D at 00:30 4 comments: