Not a bad View!

The city that father lives in has a new children's playground, skateboard area, barbecues, plus surf club with steps to the small beach.
This has cut the carpark greatly where before one could park looking at the sea, now away from the sea.
Finally these works are just about completed and it looks lovely and clean, kind of wonder how long it will be like that.
I drive past this area every week several times even though I live in another city.

When my children were little we would all spend time at weekends in this area.
There is also a bike/walking path which goes from the swimming pool then back down along the beach, past where the Spirit of Tasmania is berthed (when not sailing) over a bridge and down the other side of the river - lots of kms.
My husband, myself and our children would ride most of this area every second weekend when they were small when we used to go and stay with my parents. One of the new barbecues, there are 2 more before this one.

The skate area, there is also a smaller one on left. (not in the photo) 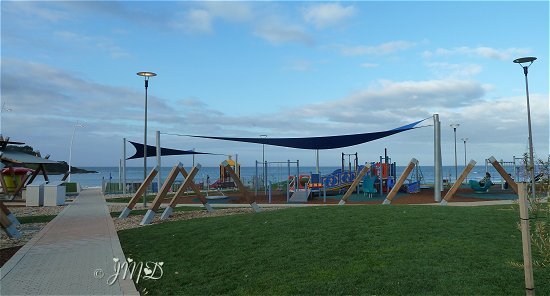 Part of the play area plus the path to the beach.
Posted by Margaret D at 23:18 2 comments:

It's a Good Thing!

A computer to me is extremely useful, it permits all of us to do many things on it and the internet.  One of my favourite things is making 'graphics' from scratch or from a photo.
These Freesias are now out in bloom in the garden so I photographed it, feathered what I wanted to keep and made a Frame for them, all of this does take several hours.
Self satisfaction to me and is relaxing....plus if I get interrupted it doesn't matter :) 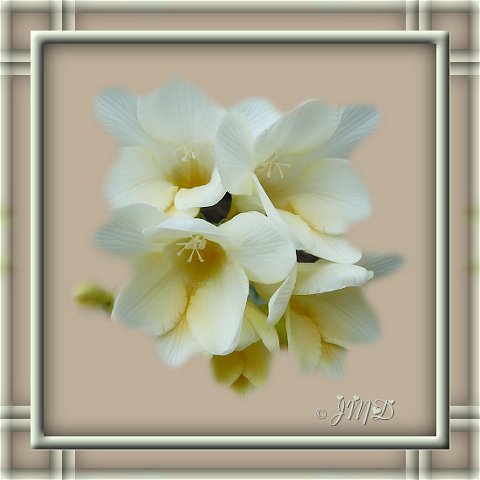 Email ThisBlogThis!Share to TwitterShare to FacebookShare to Pinterest
Labels: Graphics

The 'Margaret Davis' Japonica Camellia originated by A. M Davis in N.S.W Australia .
There is information and a photo of Margaret Davis at http://humecamellia.wordpress.com/2011/05/19/850/ 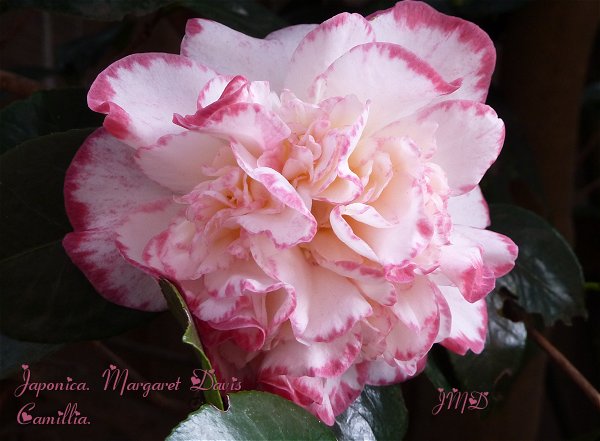 Japonica, 'Margaret Davis' Camellia which grows in our garden.
Posted by Margaret D at 14:33 3 comments:

Email ThisBlogThis!Share to TwitterShare to FacebookShare to Pinterest
Labels: Flowers

It's a good thing I don't mind cooking sometimes, but I am not a cook.

I made my father some rissoles, then I make a jelly slice which has my mouth watering.
The rissoles I pre-cooked have frozen them and will take to my dads next week, he can manage to make some gravy and give them a bit of a cook in the microwave - he has this special magnifier that he puts up to the numbers on the microwave and off he goes...for he who helps himself will get on ok :)

This week I spent over 1-1/2 hour reading the mail to my father. (paper & emails)
I replied to 8 emails for him.
I took him grocery shopping and I bought what I thought he would like to eat, and what he can manage to cook.  Of course I let him give me some input.
Everything has to be separated, wrapped in wrap for freezing it's easy access for my dad.
He has to remember where I put things in the fridge & freezer downstairs plus where I put things in his cupboards.
I did his washing, 3 loads.
He had messed up his TV which is nothing unusual, he does a wonderful job of using the remotes with his special magnifier.  So I fixed the TV again!
I helped him make the bed.
Took him and I paid some accounts for him.
We went to the Chemist.
Simple for most of us a big effort for my dad, and when I am on my dads phone talking to someone it's Murphy's Law that my mobile will ring.  My father listens to where the ring is coming from as I watch him and then he somehow manages to pick it up, bring it to me, I slide the 'thing' to answer the call and I put the ear piece to my father's ear so he can hear who is phoning me whilst I keep talking on his house phone.

When my father & I go shopping etc. he has his white stick which is only given to those who are legally blind plus my dad hangs onto my arm in a special way to steady himself.....next February he will be 88 years of age.  God has been kind to him thus far.

Whilst I was away my husband on that day took one of his friends who is recovering from an operation on a long drive....5 hours about, it worked out they averaged 56km an hour with only a few short stops along the way.  They drove to part of the north east coast of Tasmania and back.
One can see how so many people that live not on this island can not imagine traveling as so far without getting too far.  If that makes sense. 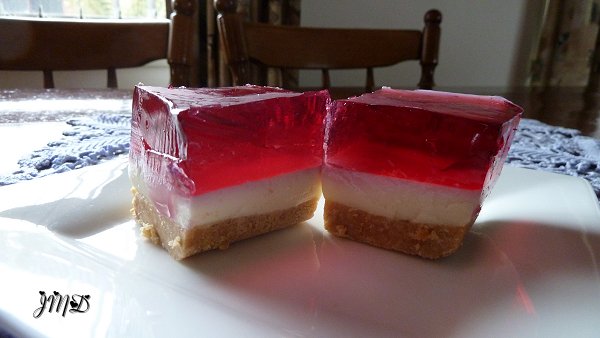 My Jelly Slices I made and I am sure most women have made these.
Posted by Margaret D at 18:40 3 comments:

Back to the Holiday

The Sunshine Coast for me is not warm enough in winter. I was amazed and amused that several nights the weather was warmer where I live in Tasmania, Australia than on the Sunshine Coast.

Jessica Watson lives on the Sunshine Coast, she is the young teenager who sailed solo around the world a few years ago. 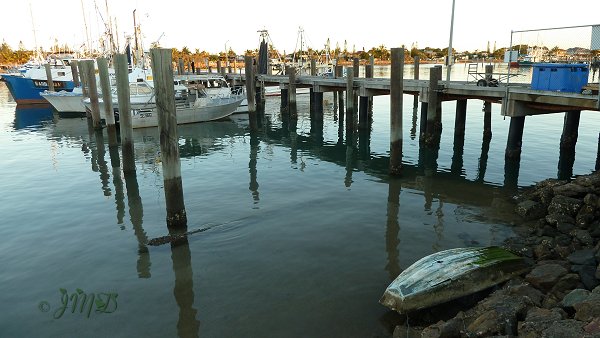 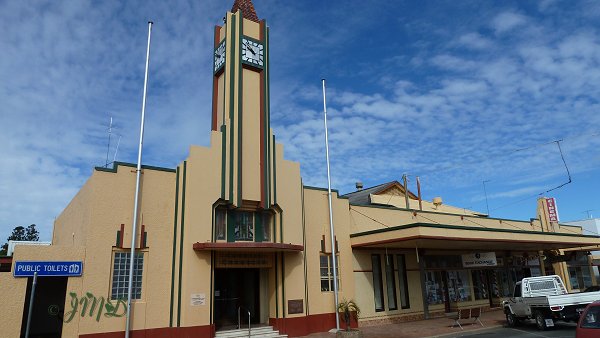 A town we passed through was Moree, as above. 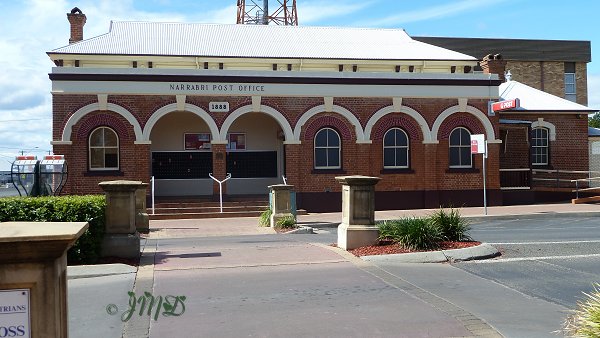 Narrabri on the north side of Dubbo, NSW 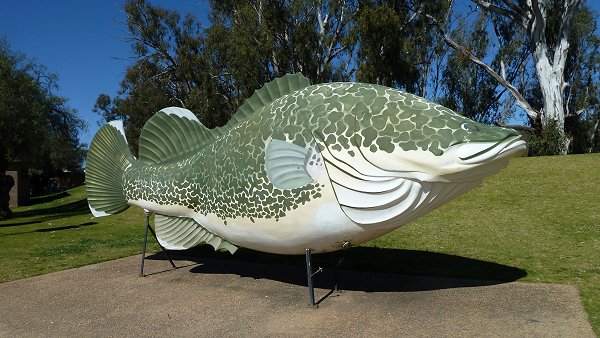 A Murray Cod at Tocuwal. NSW
We were talking to a local man and the bank behind the fish was man made, behind that is the Murray River which at the time of passing through was swollen, a sign nearly covered over.  There was once a port & jetty when the steamships sailed up the Murray. 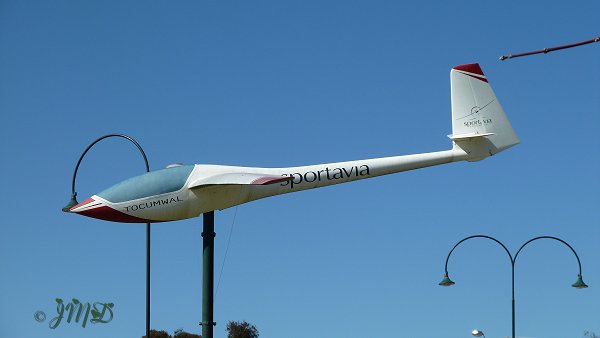 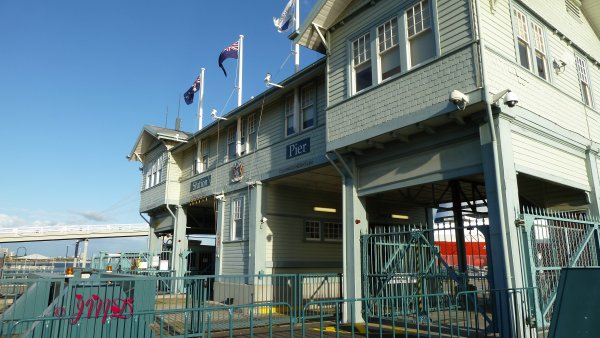 The Pier in Melbourne, Victoria. It's here we go through Quarantine and drive around and wait in the que until it's time to drive on board to sail home.
Posted by Margaret D at 17:02 4 comments:

Don't You just love it!

Dilemma, can't find the original disk which is not like me, must be my age showing.
I could find the item on the net and download the software and drivers - looked at that option but of course it's the same download as caused the problem.

Well not being that stupid for a blonde :) I thought about 'Restore System', never used or had to use that before.  How easy that was, and how lucky am I after doing a 'Restore System' for everything is back to normal with my software, so that made me happy.
Posted by Margaret D at 14:46 2 comments:

Wasn't connected at 7am this morning.
I made another phone call to the company about lunch time, and about 1 hour later a 'linesman' came from the phone company, apparently there was a 'join' in the phone wire outside and over time water had ruined this line, so he replaced it with a totally new one and also came inside and checked out the speed of my Broadband which was satisfactory seeing as I am very near the end of the line regarding the exchange.

So I am back in business, so to speak and happy about that.
Posted by Margaret D at 17:00 4 comments:

Amazing is Technology when it breaks down.
Here am I with no Landline Phone so therefore no Internet.
The phone is dead, no dial tone and it's rather eerie.
This happened - the dead phone - mid morning without warning. It's supposed to be repaired by 7 am Tuesday morning, but I do think that will be so over my dead body :)

So what have I been doing?

A little normal house work, playing games and reading...used my iPhone to ring my father, so now he knows not to phone me on the house phone, important for a blind man, & important for me.

Thank goodness I have iPad2 with Wi-Fi + 3G, it's with the 3G that I upload this post.

- Posted using BlogPress from my iPad
Posted by Margaret D at 23:03 3 comments:

Happy Father's Day to all dads...which is Celebrated in Australia on the 1st Sunday of September. 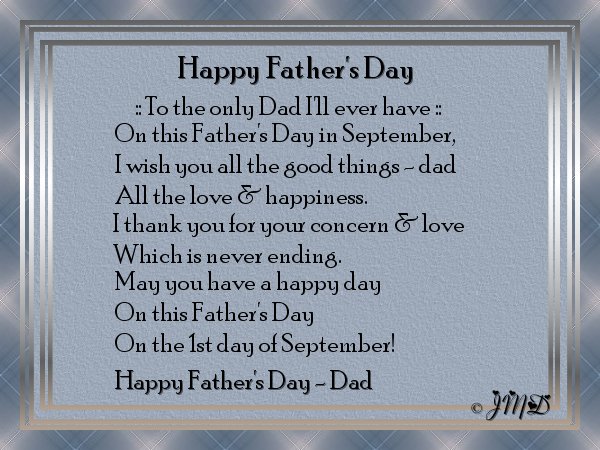