The Kitchen, Entally House and a Yacht Race.

Back home is Tasmania again - well that's where I live :) We ventured out a few days before Christmas for dinner in the evening with friends, to the 'The Kitchen'.

It's a new Restaurant at Entally Lodge at Hadspen.  The Bistro (no doubt will have a new name) is not yet finished which is just across from The Kitchen. 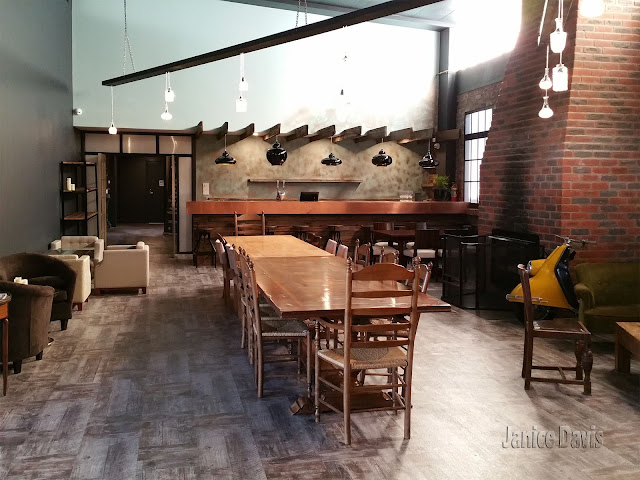 This is the Meeting Room 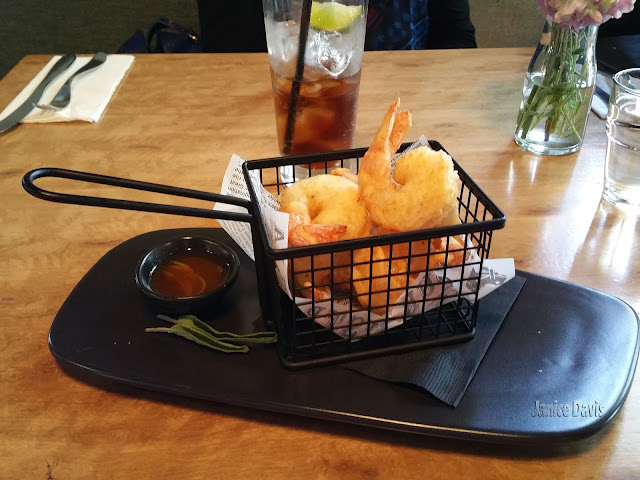 In the dinning room my Entree or Starters, depends on which country you come from.

My Entree was 'Tempura-Battered Prawns with Lima & Chilli.  Cost $15 AUD
These were beautiful, could 'eat them till the cows come home' (An Australian saying) 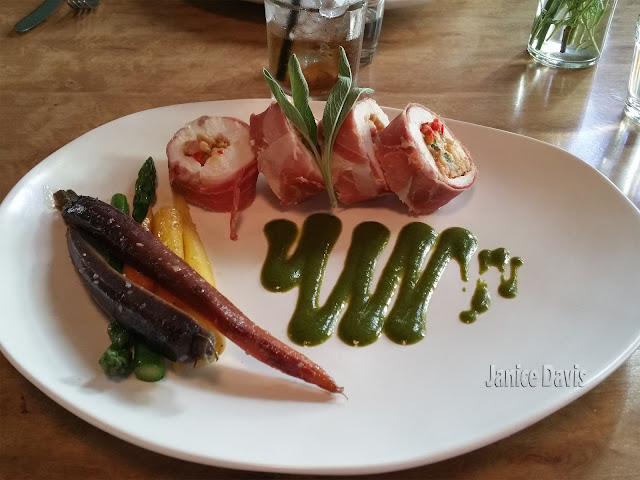 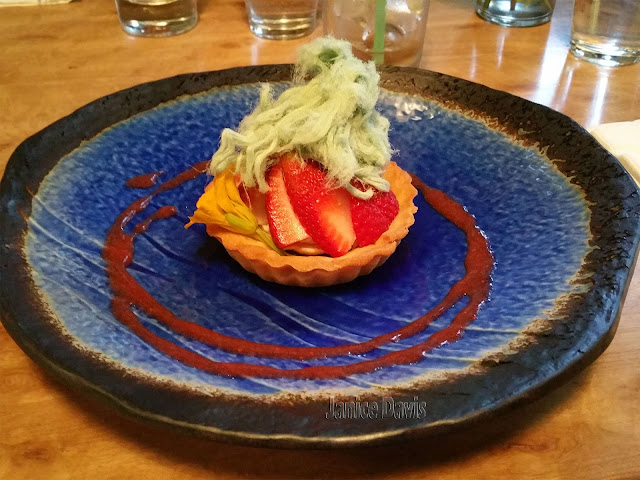 Sweets.
Tart.
Can't recall what is was called exactly but it was tasty.  The green on top was 'fairy floss'.  $12 AUD

The menu is not an extensive one but one can find something that one likes for dinner.
Lunch, wouldn't bother with it at The Kitchen as there is certainly not enough to choose from.
The above photos were taken with my phone.

This is a bit of History of note.....Opposite the Lodge on the other road is a vineyard and Entally House which was the family home of Thomas Reibey who was the Premier of Tasmania from 1876 to 1877.
The Entally Estate was established in 1819 by Thomas Haydock Reibey (senior) in Hadspen, Tasmania. Reiby worked in the East India company, and named the house after the suburb of Entally in Calcutta, India.

Thomas Haydock Reibey II was the eldest son of Thomas and Mary Reibey. Mary, who is pictured on Australia's $20 note, was a former convict who, at the age of 13 was convicted of horse stealing and sentenced to transportation. She later became one of Australia's wealthiest women and obtained the grant of 300 acres of land upon which Thomas was to settle and build the homestead and outbuildings.

Mary Reibey, Thomas’ mother and matriarch of the family, was transported to Australia in 1790 for the crime of horse stealing, then aged 13. She would later marry a junior officer of the East India Company who established the Entally name as a successful trading company that owned a number of vessels running coal up the Hawkesbury River in New South Wales.
Following her husband’s death in 1811, Mary became one of the richest and most successful businesswomen in Australia. Today, Mary is most recognisable as the face of the Australian 20 dollar note.
The Estate provided the training grounds for the 1884 Melbourne Cup winner Malua, and includes a cricket oval that’s believed to be one of the first in the country; hosting games before Melbourne was settled.
The Entally Historic Site consists of Entally House and various outbuildings, including Australia's oldest Conservatory. The Estate encompasses grand, parklike surroundings with magnificent gardens and a vineyard, Regency furnishings, fine silverware and horse-drawn coaches and agricultural implements. 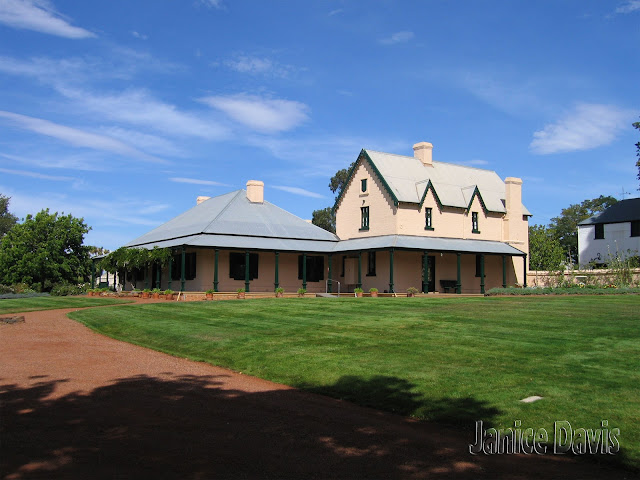 These two photos of Entally were taken a few years back.  Many Weddings take place in the grounds. 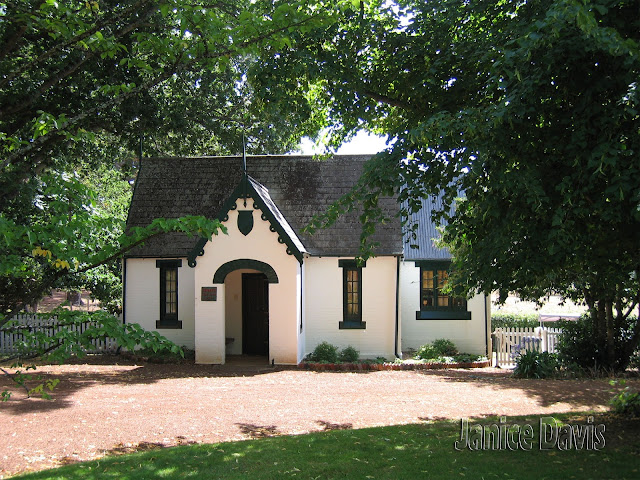 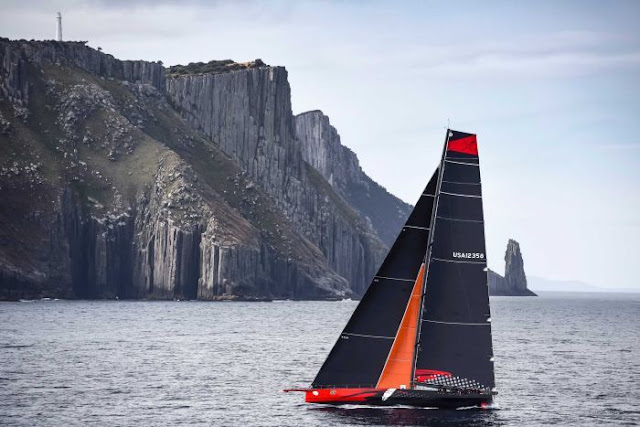 There is a big Yacht Race on now called the Sydney to Hobart Yacht Race.

The above photo is of the American Yacht Comanche which has won Line Honours, and also has a damaged rudder.
The photo was borrowed and taken near the Iron Pot which is considered the mouth of the River Derwent, Hobart.

32 of many yachts have retired due to weather damage thus being one of the toughest races in years.
Yachts will continue to arrive in Hobart concluding on New Years Day.

The Sydney to Hobart Yacht Race is an annual event hosted by the Cruising Yacht Club of Australia, starting in Sydney, New South Wales on Boxing Day and finishing in Hobart, Tasmania. The race distance is approximately 630 nautical miles (1,170 km). The race is run in co-operation with the Royal Yacht Club of Tasmania, and is widely considered to be one of the most difficult yacht races in the world.  The race was initially planned to be a cruise by Peter Luke and some friends who had formed a club for those who enjoyed cruising as opposed to racing, however when a visiting British Royal Navy Officer, Captain John Illingworth, suggested it be made a race, the event was born. The Sydney to Hobart Yacht Race has grown over the decades, since the inaugural race in 1945, to become one of the top three offshore yacht races in the world, and it now attracts maxi yachts from all around the globe. The 2004 race marked the 60th running of the event.

Bass Strait, and the waters of the Pacific Ocean immediately to its east, are renowned for their high winds and difficult seas. Although the race mostly takes place in the Tasman Sea, the shallowness of Bass Strait and the proximity to the race course means that the fleet is very much under the influence of the Strait as they transit from the mainland to Flinders Island. Even though the race is held in the Australian summer, "southerly buster" storms often make the Sydney–Hobart race cold, bumpy, and very challenging for the crew. It is typical for a considerable number of yachts to retire, often at Eden on the New South Wales south coast, the last sheltered harbour before Flinders Island.