Life inside the Caravan

Travelling and living in a Caravan for 3 months for us was wonderful. One thing for sure is you have to get on well, there is not much room to move around.  It's 'excuse me, I need to get to the fridge'.

The bed is higher than a normal house bed, there is storage underneath.  There isn't much room to move around each side or at the bottom of the bed, but you learn how to 'move'.
There is certainly plenty of storage room for us with all the cupboards. When finished with winter clothes they were all placed in a bag and put underneath the bed in storage till needed again.

Most of the knobs on the drawers came loose and had to be tightened.  The touch light in the bathroom decided not to work, so it was redone, worked for awhile, then that was it, no more!  We have ordered another to replace it.  Actually that light blew a fuse, lucky we had spares.
All lights are solar powered.

The shower was just great, don't know how life was managed with the inconvenience of going to the Amenities or Ablution block in Caravan Parks in the past.  Guess we didn't know any different before.

Hotwater to the Van was invaluable, no boiling of the kettle/jug to acquire hot water.
A/C, wouldn't be without it.  Great thing at the Top End, the nights were not that hot so we didn't leave it going.

Dirt, so much dirt and dust inside the van it was unbelievable.  The van was swept everyday and the floor washed, an easy task as there isn't much floor.

Washing machine, well that saved me heaps of money as most caravan parks charge from $4.00 to $8.00 a load to use their washing machine.  Dryers are extra.  Plus you have to take your turn, but no more..
I hang the clothes on a line underneath the awning, and they dry in no time at all.  I did the washing every few days, that way I didn't have heaps of washing for two people.

The two water tanks were great, and one grey water tank was enough to hold the grey water, when it was need.  We filled up with water before we left home and used it in places where there was not water.  If there wasn't any power we used the Gas to heat the water and keep the fridge going.
It's amazing how much frozen food can fit in the fridge.

TV!  Well I could say 'what TV'.  I recall the old caravan and analogue TV, we usually had TV, but with Digital it's a different story.  Many places didn't have TV, some places there was only a few channels, so we went for weeks without knowing what happened in the World.
Bought some DVD's to watch, and bought the whole series of Breaking Bad which we watched, still have several episodes to see as yet.  Also bought some music DVD's, they are about in the more isolated places and not so prevalent in the cities.
We have a radio in the Van, but due to the terrain we were in couldn't get anything, only once in awhile.
The TV works on both electricity and 12 volt battery.

In the morning times if not travelling we would go to the shops.
Afternoons were spent sight seeing and me taking photos usually.
Evenings, games were played on our Tablets, reading, blogging, reading blogs, commenting if there was access to the internet, mostly there was. Planning where we would go and what we wanted to see.
I crocheted making granny squares with bits of wool of all colours I took from home, the finished product will be the size of a queen sized bed and when finished will be handy in the van when the weather is cool.  I've nearly finished it.

The top of the oven has one hot plate when connected to electricity, the remainder are gas as is the oven.  We had baked meals every now and then. We ate well even having a Turkey baked dinner.
There isn't much bench space but you manage.

Seating is a problem, but with outside chairs as in camping chairs one goes outside and sits, oh yes, used to fall asleep!  Happy Hour was had some late afternoons with someone whom we didn't know, they would call us to their van or they would come to ours....it sure was a happy hour.  About 6pm we would all return to our vans. We all had something in common, 'travelling and doing the same thing'.

In all we were very happy with the van, the way it towed and the vehicle which towed it. 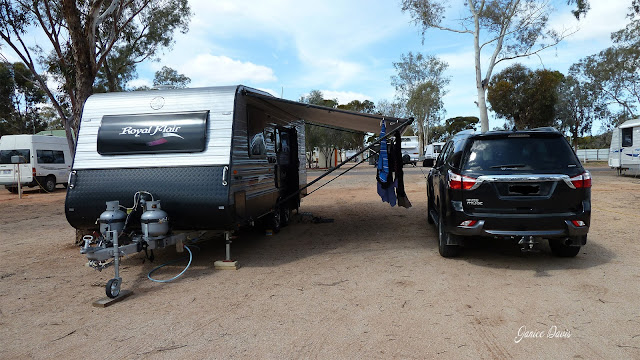 The above photo was taken with my little camera which has a GPS.  I forgot to turn it on earlier in our trip, but this photo has it. 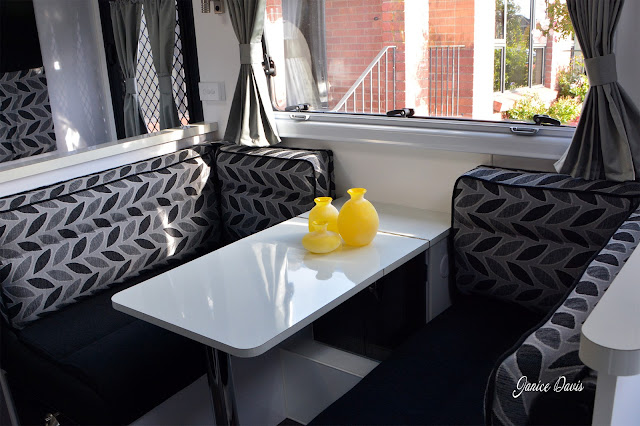 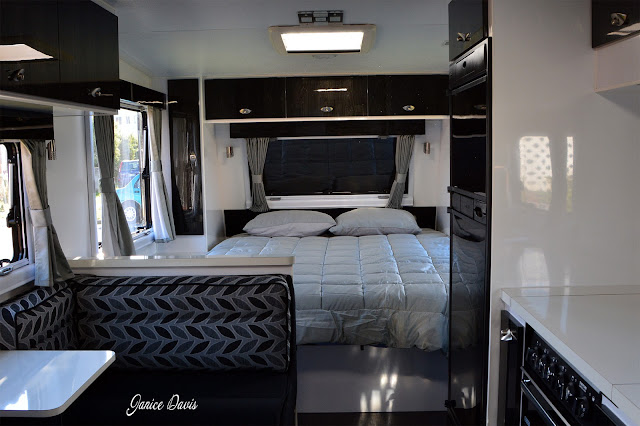 Email ThisBlogThis!Share to TwitterShare to FacebookShare to Pinterest
Labels: Holiday 2015