How lucky was I to see a Great Southern Right Whale from my dads window in the sea of Bass Strait which is the sea between Tasmania and mainland Australia.
I just sat glued looking out the window watching for ages. Unfortunately my dad couldn't see it due to his blindness but I described what I saw, and many smiles came upon his face :)

There is a sculpture of the Great Southern Right Whale at Cockle Creek on Recherche Bay at the bottom of Tasmania, a [photo] which I took of the sculpture in an earlier post.

Bay whaling was performed extensively during the 1840's and 1850's.
The southern right whale spends summer in the far Southern Ocean feeding, probably close to Antarctica. It migrates north in winter for breeding and can be seen by the coast of Argentina, Australia, Brazil, Chile, Namibia, Mozambique, Peru, Tristan de Cunha, Uruguay, Madagascar, New Zealand and South Africia. 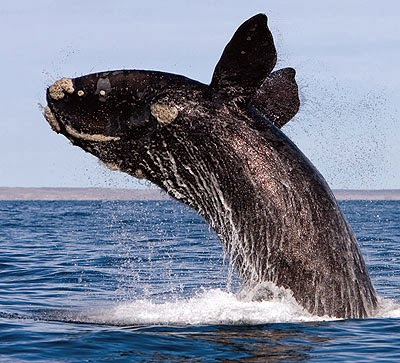 This photo is borrowed.
Posted by Margaret D at 00:05